Egyptians most numerous pilgrims to Mecca

Egyptians most numerous pilgrims to Mecca

Six million pilgrims have visited Mecca since the beginning of the Umrah pilgrimage season in February and Egyptians have comprised the largest contingent from any nation, Saudi Arabia's Hajj minister Bandar El-Haggar said Wednesday. 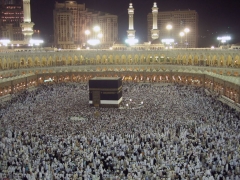 There are currently half a million pilgrims from 70 countries in Mecca, added El-Haggar.

The number of pilgrims has increased by half a million this year, according to the Saudi National Committee for Pilgrimage.

The number of pilgrims is expected to increase during the last ten days of Ramadan.

Egypt's total travel expense outflows in July 2011–March 2012 are estimated to be $ 1.9 billion, most of which is spent going to the oil-rich kingdom during the pilgrimage season.


The Umrah is a pilgrimage to Mecca performed by Muslims that can be undertaken at any time of the year. It is sometimes called the 'minor pilgrimage' or 'lesser pilgrimage'. The Hajj is the 'major' pilgrimage and is compulsory for every able-bodied Muslim who can afford it. The Umrah is not compulsory but highly recommended.

Re: Egyptians most numerous pilgrims to Mecca

Anytime anybody I knows goes I always ask about the toilets it amazes me when you see it, I would love to go, even though I hate crowds..

"The Salvation of Mankind lies in making everything the responsibility of All"
Sophocles.
Top
2 posts • Page 1 of 1