Cassell. Jewish, funded the first Aswan Dam, was an immense Egyptian farmer, intimate of Edward VIII and paid the King’s huge bills (and more), was King’s ‘private banker’, was a member of the King’s Privy Council, a possible Catholic convert, funded development of other 3rd world countries and built an immense fortune that his nympho granddaughter used to get that penniless peacock, Mountbatten, out of the shadows and into his inglorious career including arranging his destitute nephew’s marriage to a rich woman. In his spare time he co-founded the Bank of Egypt and its Agricultural Bank as vital lenders of international integrity – alas that financial integrity for Egyptian banking is now lost.

Sir Ernest Cassel 1852-1921, German, as much of the UK financier class was in pre-Brexit days, trained with various private European banks with an exposure to lending to Turkey, South American governments, the funding of the London underground and Vickers.

Too often historians label the UK administrators, like Cromer, as the builders of Egypt which minimizes the cleverness, energy and capital of others that achieved great things. In addition they brought new ways of doing old things and science but Administrators never did any of that.

The banks he was connected with were the major debtors to the spendthrift Khedive – not UK banks which is a fact not well known. 23 years later in 1898 with the spending still over the top, nothing new there, the broke again Kdieve sold his immense farms, the Daria Sania Estates (approx. 300,000 feddans), more land was acquired in Upper Egypt in 1904 in the usual way suitcases of cash for another spendthrift ruler and these farms were no better run from a human or agricultural point of view than you would guess. (This is very poorly studied, especially in Egypt, not helped by closed archives and low local standards of history teaching/writing – propaganda).

The private Bank of Egypt was also created at the same time to issue currency and regulate the finance system – not as unusual as you would think given the Bank of England was private until 1946. Cassel was the center of both the farming and banking consortia and the Aswan and Assuit barrages, the major reclamation of land/more irrigation and the development of sugar at Kom Ombo. His achievements dwarf the farming fiascos of the past 70 years – all of which have failed hugely.

So when you next meet Hawass, the Luxor Governor or Farag tell them a Jew did more to develop Upper Egypt than anyone since a Pharaoh.

Unlike Egypt’s current billionaires who pay little taxes and give almost nothing to charity Cassell did some things on the edge of disease control.

The great eye doctor Arthur MacCallum was funded to deal with the trachoma of Cassell’s workforce and did a brilliant job. The Government of Egypt has no memorial to MacCallum but many to people who did nothing. http://blogs.lshtm.ac.uk/library/2015/1 ... lmologist/ This is the travelling hospital in the Fayoum which he funded in 1904 showing, unlike current arrangements, that diseases that can be fixed don’t need bricks, marble and mortar. The scores of Fever Hospitals now in Egypt prove me wrong – or not.

Cassell founded the Giza Institute of Ophthalmology which used to be a world leader and now does little – possibly nothing. An interesting 1925 building that provides a grand office for the nearly dead or those who don’t care. 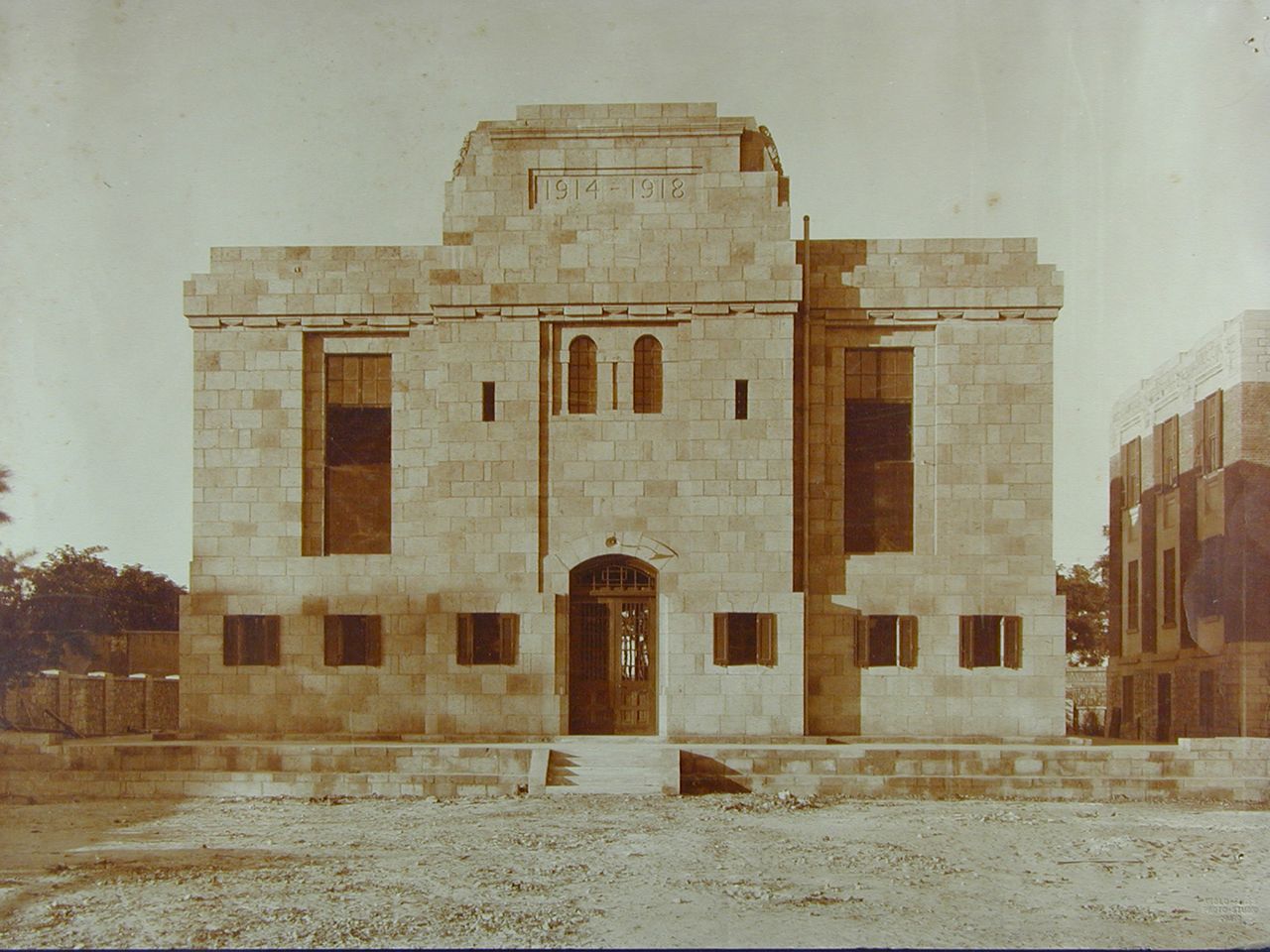 After more than a century and 4 military rulers the easy to treat Trachoma has exploded with more than 1/3rd of the kids in the delta with it. Arguably the situation is now worse than 1905 with all of the medical limits of that time. Quite an achievement for Egypt to go backwards on simple things that hurt people. The Giza Institute seems to have failed and should be abolished. https://bjo.bmj.com/content/85/12/1406

Cassell is a person recognized by the world but entirely, and deliberately, ignored by Egypt. Maybe in Egypt you need to trash millions on archaeology rather than build infrastructure and create jobs – I think many believe that. The current contribution of the Cairo billionaires to the poor of Egypt could be recorded on the back of a postage stamp – a small stamp.

A small silver presentation item paid for at the time by Cassal for the Aswan Dam sold for Stg 0.1 million a few years ago – it wasn’t made, let alone designed in Egypt, but by Garrards and Egypt has none: Since that time items of beauty for major events in Egypt have usually been heavy suitcases.

The Crown lands bought by Cassel and others were sold after the dam had made then more valuable – double – and half the profit returned to Egypt via the Keheve’s share.

In a pre-machinery stage the first Aswan Dan was a major engineering and building achievement. Here it is at a building stage:

A photo of the building of the dam shows the mixture of steam cranes with primitive manual work.

Another which shows you the seeming chaos but which produced a structure that has survived 120 years. 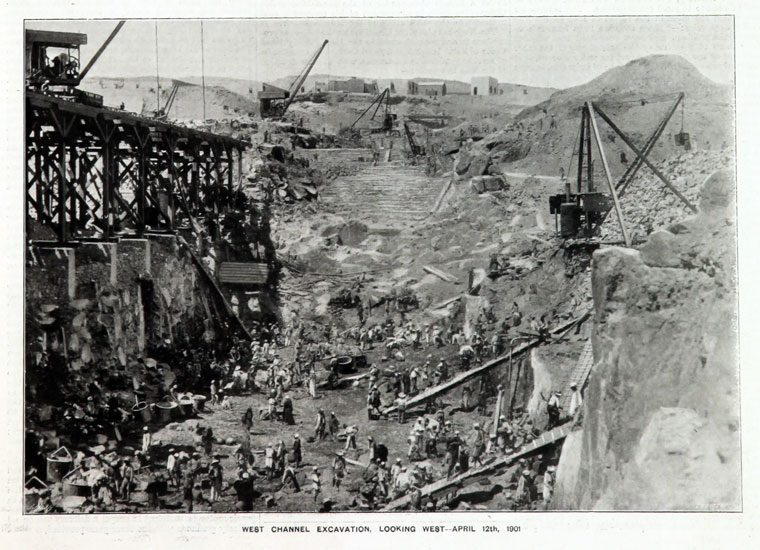 The Assuit Barrage was completed around the same time and funded by Cassel to lift the level of the Nile and increase irrigation/agricultural production in that area. It still works after 120 years, and with no further capital or technology investment, but gets little PR attention in an Egypt now full of engineers. Its apparently to be renovated soon – I wonder whether that is the first. At the time the low dam was regarded as a major risk/achievement. Here is Cecil Rhodes and friends/harem in 1902 at the Dam – so to speak. Imperial possessions have many, and cheaper, benefits that London does not.

In someways and given the paucity of machinery and the huge demands of directing a very large workforce the 1st and 2nd Dams were amazing achievements and seem to have been on time and on budget. The loss of life is hard to find.

Local support and investment was for the dam/farming project involved the Jewish Suares and Greek Salvagos families in the bank and the opportunities in farming against a background that the existing large hereditary farmers, many Copts, were lazy and uninnovative -not much difference now.

So these capitalists were pushing the local Copt and Muslim farmers who weren’t much good. There was also corruption and the great Baring, de-facto UK ruler of Egypt, had family interests in the bank that ran the finance for projects he approved in the place he governed. No conflict of interest. – according to him

At this time, and still now, the ‘colonies’ all over the world were generally backward or at least in need of huge capital to modernize and utterly lacking internal funds, and many skills. Not now, but then, bankers and investors, including Cassel, travelled to Egypt and spent considerable time there. Alas the days of the richest people in the world, Rockefeller, Harriman, Schiff, Hearst, Gulbenkian, Onassis and others in Egypt is long gone but they now travel to India, Tuscany, Morocco and the South of France as many have for generations.

Like many personal fortunes quickly made and based on relationships a deal lagged in his old age and after his death and the Egyptian banks descended into self-interested and inept investment much of which has done little to benefit Egypt. 120 years later and hundreds of billions on I can think of not one single sensible investment made by governments.

In all the records on Cassell I’ve not found a single reference to corruption – the same can’t be said of Lord Cromer (Baring).

In the area around Luxor and at a similar time there was a fabulously wealthy and innovative Muslim landowner/manufacturer/banker. I will look further on him because he illustrates that these developments weren’t just western imperial projects but few socialist/post Modernist historians like hearing that.