Geerte Hofstede is a major Dutch sociologist/management theorist who has studied Egypt and many other countries. Unlike others who just look at statistics he tries to identify the values and human qualities which lead to bureaucratic, business and personal success. He has had academic and business success, is middle of the road and is well regarded and uses a standardized approach of comparing why some countries work and others don’t.

His thinking goes against the managerialists and UN dam builders who see things just in mechanical/financial/statistical terms and who have tossed trillions at the third world with little benefit according to a recent UK Economics Nobelist, Deaton. https://www.telegraph.co.uk/comment/119 ... n-aid.html and https://www.forbes.com/sites/timworstal ... a3ab5b2603 and https://www.cfr.org/event/angus-deaton- ... inequality

Geete’s chart of the overall rating of Egypt won't post:

Its difficult to have democracy and capitalism without a certain minimum of individualism and personal responsibility.

A comparison with blood soaked Libya is a bit risky but the figures on individualism and pragmatism are astounding for a country that shares a border with Egypt.

Another on power distance, definition below, in the west explains a few bad things about la grande France. Note the Japanese figure is less than France - my god those Japanese 'robots' should migrate to Europe to feel the same - except on long term thinking. 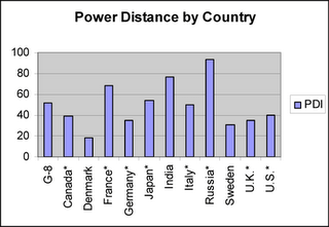 Power distance is the extent to which the less powerful members of institutions and organizations within a country expect/tolerate and accept that power is distributed unequally. Put another way its about hero or leader worship – something the Americans are moving towards or what we might expect of a Boris Prime Minister ship.

Uncertainty avoidance isn’t just about avoiding risk but avoiding complex things that raise uncertainty. The near complete avoidance of long term planning in Egypt should surprise no one except that Nasser’s system was about Soviet style 5 year plans and army thinking should always be about the long term – assuming the Egyptian Army does any thinking rather than just act on impulse. https://www.hofstede-insights.com/country/egypt/
He says:

‘Egypt is more likely to follow a caste system that does not allow significant upward mobility of its citizens. They are also highly rule-oriented with laws, rules, regulations, and controls in order to reduce the amount of uncertainty, while inequalities of power and wealth have been allowed to grow within the society.

When these two Dimensions are combined, it creates a situation where leaders have virtually ultimate power and authority, and the rules, laws and regulations developed by those in power reinforce their own leadership and control. It is not unusual for new leadership to arise from armed insurrection – the ultimate power, rather than from diplomatic or democratic change.

The high Power Distance (PDI) ranking is also indicative of a high level of inequality of power and wealth within the society. These populations have an expectation and acceptance that leaders will separate themselves from the group and this condition is not necessarily subverted upon the population, but rather accepted by the society as their cultural heritage.’

Hofstede does consulting work and holds conferences in the Middle East but not in Egypt. In fact I cannot think of a single major world thinker on government, economics or management who has been hired by or visited Egypt in the last ½ century except Castro, Gadaffi, Assad, Saddam Hussein and all the Nazi ‘refugees’ who flocked to Nasser for a job. No one seems to visit except the droves of UN agency heads or local UN managers whose education and career achievements in the UN are never likely to get them a job elsewhere. http://www.cyborlink.com/besite/egypt.htm

The Turkey figures are similar except that individualism and long term thinking is stronger - significant factors in moving forward.

India is 7 times more long term in thinking, twice as prepared to take a risk and twice as individualistic and its less than half as rich. The poor, Muslim and unstable Indonesia is interestingly much less concerned about risk but hugely committed to the long term, something Egypt is not.

An idea. If you are terrified about risk, like Egypt, is any long term planning or thinking possible given the future is by definition more ambiguous and risky? You also wonder whether 70 years of military rule suppresses individualism to the herd mentality and emphasizes rigid hierarchical decision making, no delegation and little debate.

I can’t think of a single successful military dictatorship in the past 120 years – although they do survive for a while but generally have to be removed with blood. Myanmar and North Korea couldn’t be considered successful except from the point of view of a very few. I guess there were a few basket cases in South America – all of whom bankrupted their countries and we shouldn’t forget Gadhafi, the blood-soaked Grand Mufti of Jerusalem, Mengistu, Idi Amin, Assad, the war criminal Bashir, the cannibal Emperor Bokassa and Saddam. A lot for one small part of the world.

There is a related survey of all countries by the UN – the World Values Survey. Its very UN – overwhelming detail except on important issues, tons of data, no conclusions/trends - not very useful – except to its employees. A couple of findings of their 2012 survey of Egypt confirm the Dutch data. http://www.worldvaluessurvey.org/WVSDoc ... ionWV6.jsp

In Egypt imagination is not a quality instilled in children, determination and perseverance are given a very low priority – except amongst the poor, unselfishness is lowly regarded – except in families, as is self-expression, most people cannot be trusted, overwhelmingly Egyptians would never under any circumstances sign a petition and would never go on strike. Government ownership is strongly preferred over private enterprise and private responsibility for the personal standard of living is small and government responsibility for it very large.

Other interesting points in the UN survey:

1. In 2012 over 70% of Egyptians were unhappy with life. I wonder what the figure is now and what do people do with such feelings?

2. 4 in 1,000 Egyptians are a member of a community, voluntary, trade union, and sporting or church related organization. This suggests that there are few community organizations in any organized sense and that may not be accidental in a dictatorship that wants control of everything.

3. Overwhelmingly for both males and females and consistent across all age groups Egyptians have a strong belief that men should get priority in employment over women – and the same men object to quotas for women. Over 85% of Egyptians and 2/3rds of women think that men make better politicians. After 70 years of male failure the country must be mad to stick to this dogma. A bit less than 80% don’t trust the women’s organizations although some westerners on this forum do – they know better than mere Egyptians.

4. 60% of Egyptians don’t trust people from another religion. 80% don’t trust people of another nation. 75% don’t trust trade unions – probably Government controlled trade unions. Nearly 90% support a system of government with a strong leader, no parliament and no elections. Over 86% of Egyptians believe that one of the most important needs for the country is a greater respect for authority. 94% believe that religion is right where it is in conflict with science. That’s not positive support for much change.

With results like these Egypt has no happy future/a small community impetus for much change. Tossing aid money at Egypt, least of all on the canal, the New Imperial Administrative Capital and $US30 billion on military hardware probably won’t have much positive effect on human lives or values. The problem may not be capital investment and jobs but values and thinking at a fundamental level created by an environment of 70 years of Junta rule, media control, propaganda, leader worship, a rotten education system, an Islam/Coptic religion which refuses to reform/modernize, views which are closed to the broader world and unacknowledged feelings of failure and insecurity.

Change is complex and only the UN believes that segmented, one-off and mechanistic institutional/system reform will do the job. It will do one job – provide UN workers with lots of jobs and ‘spending money’ – from us.

At worst these figures indicate that the 2011 reform movement was based on a small support base and what appeared to be a call for large change may have been just anger/frustration with Mubarak rather than a clear idea of for fundamental change for the future - a different captain and some senior officers rather than a different ship might be not untrue. A speculation on my part. As its turned out its just different puppets with the puppet masters largely unchanged.