ORASCOM to MANAGE FIRST-CLASS FACILITIES AT PYRAMIDS OF GIZA

ORASCOM to MANAGE FIRST-CLASS FACILITIES AT PYRAMIDS OF GIZA

ORASCOM SIGNS CONTRACT TO PROVIDE AND MANAGE FIRST-CLASS FACILITIES AT PYRAMIDS OF GIZA
Eco-friendly vehicles and fast-food joints by the Pyramids? Yes please!

Egypt's Supreme Council of Antiquities announced on Thursday that it has signed of a contract with Orascom Investment Holding to manage and service the area surrounding the Pyramids of Giza. The contract retains the council's authority over the area, with Orascom's role being to provide high-quality service, Ahram Gate reports.

According to the council's president, Dr. Moustafa Waziry, Orascom will manage a new parking lot for tourist buses off Fayoum Road and provide an internal transportation network for tourists within the site, in addition to 20 mobile bathrooms. Orascom will mobilise, according to the statement, thirty buses and twenty eco-friendly vehicles to carry tourists in, out, and around the Pyramids plateau.

In addition, a moving medical center will be available on site and fast-food and snacks trucks are expected to finally appear around the Pyramids. The statement goes on to add that Orascom will also provide high-speed WiFi services and lay the groundwork for a comprehensive digital guide to the site.

As for horse and camel riding, the company will invest in training stable owners to deal with tourists and work on providing them with stable incomes and uniforms to wear on site so they're easily recognisable by tourists.

Negotiations between the council - which will retain security control over the area along with the Ministry of Interior - and Orascom lasted about a year, Dr. Waziry revealed, with the final agreement guaranteeing the council half the revenue generated by Orascom's services, as well as maintain its right to end the contract at anytime should any commitments go unmet by the company.

Love it. They are a not very good construction firm whose headquarters on the Nile wins the prize for the ugliest building in Egypt. They have no experience in managing historical sites which becomes clear on one sticky point. The 20 mobile bathrooms/toilets a fragrant element during the hot weather. Other reports say 34 toilets. A 10 year old would tell you that 34 is not enough for 10's of thousands of tourists per day - often aged and incontinent. Some disabled and some looking for an Eastern Squat toilet and 'all' that goes with that. A deal of it on the floor.

As usual in Egypt its a single big contract with no opportunity for small local entpreneur's to participate. Or young people. Interestingly there seems no plan although they claim in other reports to have been negotiating it for 12 months. What will it look like - as if anyone has an idea and was there a competitive tender - I doubt it. What is Orascom's yearly payment/lease costs and what amount have they contracted to invest? Orascom is a major contractor on GEM which is now at least 100% over budget and 2-4 years over time. Quite an achievement in their major area of expertise.

Most countries would have decided on a subterranean service facility to provide all these services and with no visible presence to protect the site. However in Egypt they have allowed roads/highways all around the site and housing and a mess of commercial developments within 200-300 meters so they won't be worried about a Las Vegas 2 approach now. Their latest mad idea is an expensive walkway/garden the 3-4 k's from GEM to the pyramids. How it is going to get over or under the various roads on the way might be an issue for Orascom and their superb North Korean Best Friends. Who is going to risk security, harrasment and the heat and do the 4 k's just to walk through a 1 star garden?
Top

Thanks Hafiz, I knew nothing about them.
Carpe diem!

I didn't imply a criticism but as you and I both know everything, even seemingly good things, has a labyrinth behind it in Egypt usually leading to a dark place. I should have made the obvious point. Its a World Heritage Site yet unlike the hundreds of others there is no overall plan to protect and preserve it and its clear to everyone to date that its a confused ugly mess. For decades its been not cheap bandaids that have no clear objectives and solve only a small issue - toilets.

If you were looking to Orascom to make it better you would die either waiting or die on their early delivery.

It reguires an international congress, lots of western money, sorting out the commercial and housing incursions, examining the effects of climate change, reserving areas for digging for the next 50 years. Following which you would decide on minimalist roads, buses cars (you car drive a noxious fumed car to within 50-100 metres of the pyramids and park it) as well as all the human/tourist aspects as many of them concealed as possible.

Job opportunities for ordinary and young people should be a priority beginning with the obvious of a booth that allocates them. You don't need a 3 or 4 year degree to be a tour guide, see all of Europe, and proper, intensive and extensive training (unknown in Egypt) has worked everywhere else as several hundred simple aboriginal tour guides in Australia can tell you and whose tips from overjoyed European and Americans tourist clients exceed their formal incomes. A good tour guide is always a good communicator and likable person and these are far from true of Egyptian graduates. World class architects/engineers/infrastructure experts/botanists etc would then be called and a world committee decide. It won't happen. Instead no plan, urges and impulses, stuff ups and responses are what Egyptian rulers seem to prefer.

That the area is a mess, harassment center and chaos tells you all you need to know about the Supreme Antiques. They can't manage it with their 77,000 staff and hand it over to a private enterprise building and construction firm. Imagine if the UK subcontracted the British Museum or the Greeks the Parthenon. What if the US contracted out the Statue of Liberty to Trump Building Co.It would be an admission of complete failure to manage the number 1 cultural item.

Here are some images of their achievements to date on this mess of a site.

The camel scam has been around for 100 years and only gets worse.

A mess of a retail precinct.

Chaotic organization and processing of tourists – notice the 10 foot concentration camp fence in the middle distance. 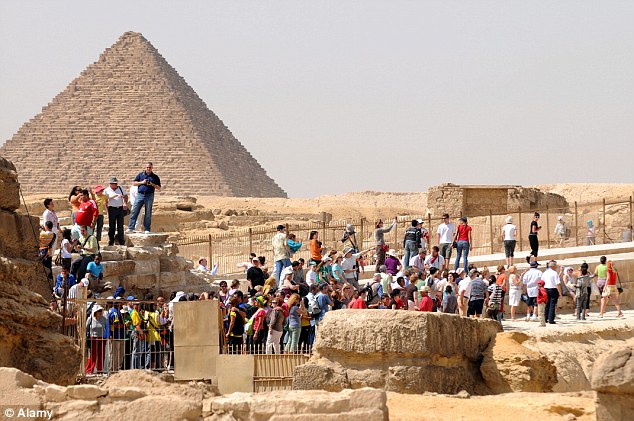 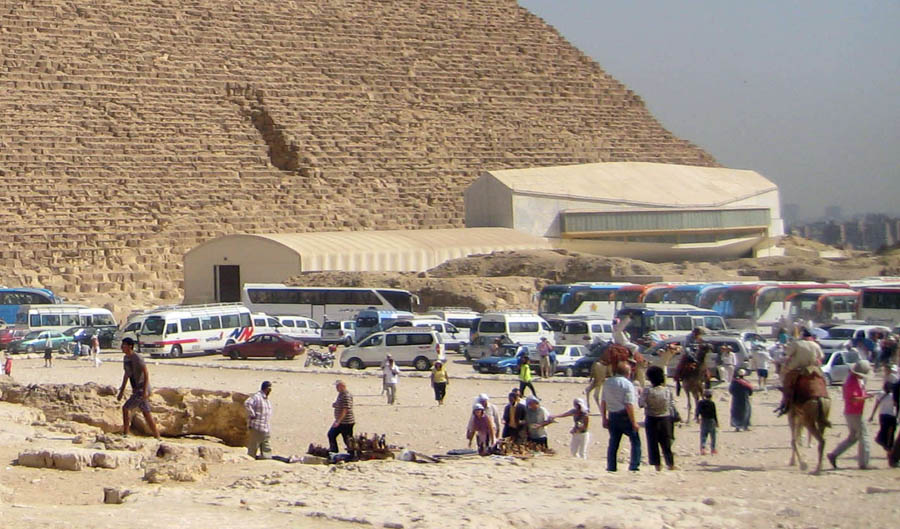 The existing toilet facilities. I'd prefer to do it in the desert. An 'authentic' method which US and EU tourists to outback Australia on $US700 a day trips like is to be given a small spade and pointed in a direction. Apparently Upper East Side and 16th Androi. dinner parties tell the story with pride and a bit of celebrity. Probably not for Egypt. 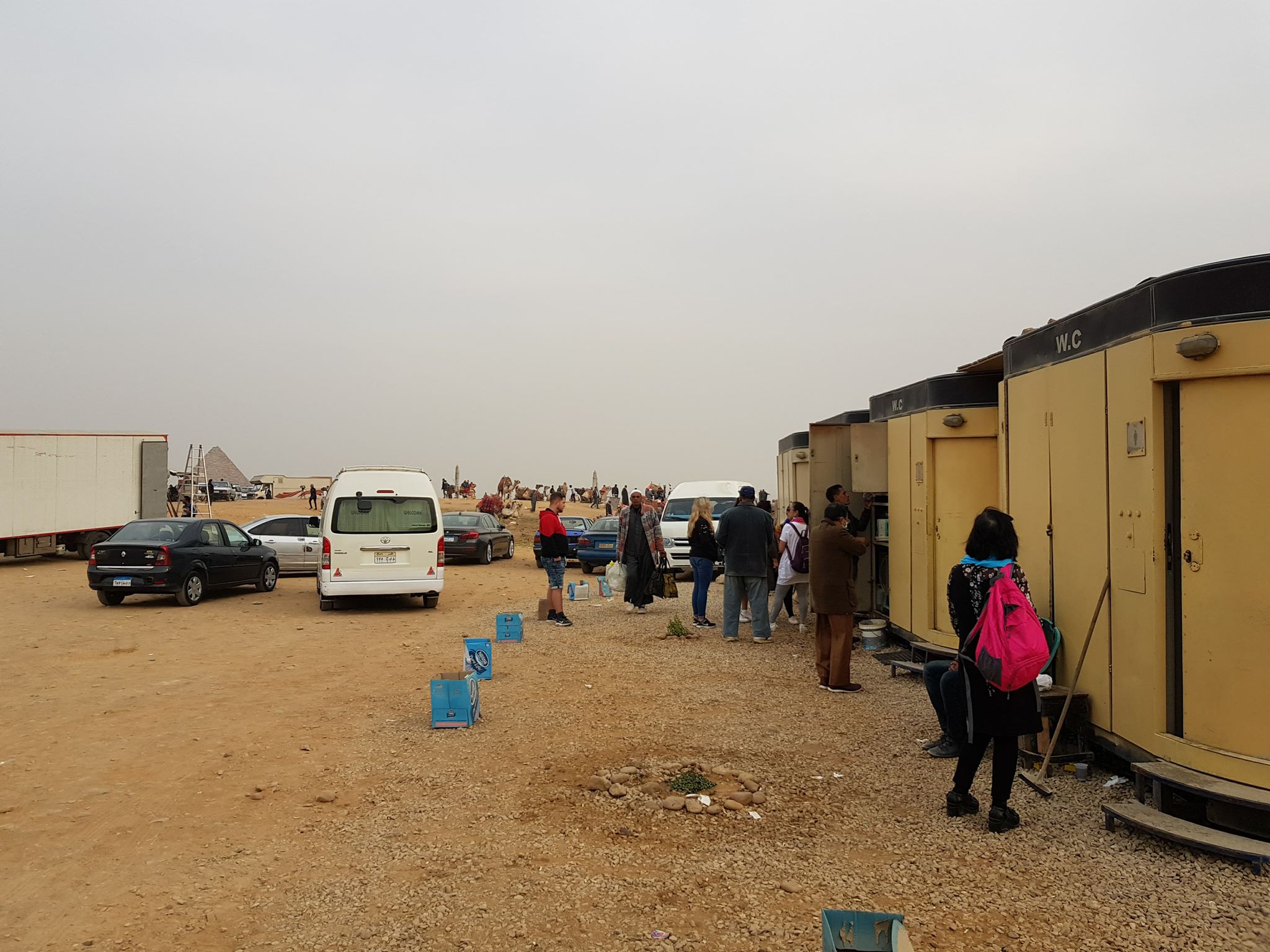 With the above look at the chaos of vehicles/unregulated road and the large truck on the left. Any idiot would know. a high thatched fence, rules on vehicles etc. But no.

The ‘charming’ local suburb – I don’t think the locals benefit much from the Army/Orascom/SCA controlled Pyramids Industry and haven't for lifetimes and no one has tried to use them usefully - home visits, traditional restaurants, traditional dancing and singing etc. The government has done its job – the street isn’t sealed, there is no curbing or guttering or planned pedestrian walkway/footpath and no street lighting. Good government on full display.

Given the lack of public plumbing you wonder about the water table and its risk to the monuments. Needs a comprehensive plan - something Hawass opposed for decades because a fixed and inflexible position would, in this and other places, reduce his maneuver/exploitation/flexibility and 'opportunities' for other things.

A press report 18-24 months ago said the Supreme Generals had been given legal control of the whole Giza site. What that meant and whether that persists I don't know.
Top
4 posts • Page 1 of 1