Egypt yesterday announced the arrival of the first electric bus from China which will service the Alexandria Corniche Road.

Local media, including the state-run Al-Akhbar newspaper, reported that “the first electric bus has arrived in the port of Alexandria coming from the port of Shanghai, China, as part of supply contract that includes 15 electric buses.”

“The new bus is scheduled to enter the transport system after a three-month trial,” said Khalid Eliwa, chairman of the General Authority for Passenger Transport in Alexandria. 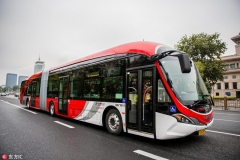 After the three month trial, he added, Egypt will be ready to receive the 14 other buses which were agreed upon, “to ensure the highest performance under the Egyptian weather”.

Egypt signed a contract for the supply of 15 electric buses from China in January making it the first country in the Middle East to operate such buses.

Hope they don't have any power cuts while charging them up

Hoe the lead is long enough to reach from one end to the other.

Should not be too much trouble with charging after all its Lower Egypt where all th money is going to keep the voters happy. Similar to London in the UK
Top

I've heard of the slow boat to China, but **** me, how long did the journey take?