Egypt women: Where tampons may cause a security alert.

Egypt women: Where tampons may cause a security alert.

Cairo airport's security screening starts at the door to the terminal buildings. Only passengers are allowed in. Even before check-in, they have to put their belongings through the large scanners, have their tickets and passports checked and walk through a scanner themselves.

It was at this point that I was pulled aside for a pat-down. A uniformed woman ran her hands down my body and legs and came back up to find a lump in my right-hand jeans pocket. It was small and bullet-shaped. 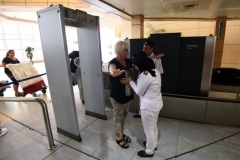 The guard pointed and said, in Egyptian Arabic, "What's that?"

"Oh nothing", I said, "it's just…" Thinking it was a tissue, I pulled it out… then realised that to my horror, I was waving a tampon in her face. She raised her eyebrows, apparently oblivious to my embarrassment, then looked perplexed.

"What's that?" She said again.

Now I raised my eyebrows.

I've questioned an Egyptian presidential candidate and government spokespeople in Egyptian Arabic but here I was stumped. "It's for that time every month," I continued, to her ongoing frown and the slight shake of the head Egyptians give when they want you to explain.

"It's for the monthly period, the monthly bleeding," I said, resorting to modern standard Arabic.

"Oh the beeriod?" She said, using the English word. "How do you use it?"

Here my faint embarrassment turned to a full blush and I thanked the heavens I was travelling alone. I explained that it stops the flow of blood and she once again looked perplexed by how this small white object could do such a thing.

My suitcase, meanwhile, had emerged from the scanner and another guard, this one male, was waiting to question me about all the wires and microphones in there.

I asked the female guard if she'd like to see the instructions from the box of tampons I had in my suitcase, and she looked askance, saying "You've got more?! We'll have to put them through the scanner by themselves."

This encounter is in fact typical of many Egyptian women's reactions to being presented with a tampon, or the idea of one. I had previously had a similar exchange with a colleague caught short at the office who turned down my offer of a tampon after she understood what it was. I had shown her an instructional online video that made her eyes bulge. And when retelling this story to Egyptian friends and other foreigners living in Egypt, I heard plenty of similar tales of Egyptian security guards' bafflement and many questions from curious women.

Misinformation abounds. Sex education is left mainly to parents and when puberty is covered at school it can be after some girls have already started their periods. Even the language reflects the extent to which this subject is ma'ib as they call it in Egypt, loosely meaning "shameful". Women prefer to use English words and no true Egyptian colloquial expressions have developed, leaving only terms from modern standard Arabic or foreign languages.

Tampons are not discussed as an option because of the fear that they take a girl's virginity, or rather, break the hymen.

This even extends to advice from pharmacies. A friend told me she was once asked whether she was married before being shown the tampons. The national press too stirs the misunderstandings - for example, a recent article featured three mothers fearfully discussing the dangers of tampons.

But, as the British-Egyptian author and women's rights advocate Shereen El Feki points out, a huge number of issues are bound up in tampon use - control of the body, mobility and the fear surrounding pre-marital loss of virginity. She believes the extent of their use should be used as a measure of women's emancipation by the UN.

Back at the security gate in Cairo airport, the male guard wanted to go through my radio kit piece by piece but the female guard had a more pressing matter for him. She thrust my box of tampons into his hands crying, "Look at these things she's got! I think we should put them back through." He rifled through them and nodded his approval. As the tampons were re-examined in the suitcase X-ray machine, the female guard pored over the instructions.

She handed me back the box, which had now cleared security, and leaned in close. She asked conspiratorially, "Can you get these in Egypt?"

I told her with delight that indeed you can, and suggested she keep the instructions. She did, and I wish I had given her some of the tampons. But I'm minded now always to keep a tampon in my pocket at airport security to bring more women into the fold.

Re: Egypt women: Where tampons may cause a security alert.

But I'm minded now always to keep a tampon in my pocket at airport security to bring more women into the fold.

A glutton for punishment

Surely the sensible place to keep your tampons is in a labeled box in your luggage....or......