Egypt And Sudan: Is This The Stage For Africa’s Next War?

Egypt And Sudan: Is This The Stage For Africa’s Next War?

While disagreements surrounding the Egyptian-Sudanese border have been present for years, recent months have seen a marked increase in tensions, alongside a series of punitive measures launched by Cairo and Khartoum. Bilateral relations are far from the high they reached in 2004, when the Four Freedoms agreement was reached, allowing citizens from both countries to travel, work, live and own property in either country without permits. Tensions came to a head in late 2016, with Sudan banning all Egyptian agricultural imports, citing vague safety concerns. Agricultural exports to Sudan are an important market for Egypt, with Khartoum importing $591 million worth of said goods in 2016 prior to the ban in September. This move comes as Egyptian agricultural imports have surged following the flotation of the Egyptian pound, cutting prices by half.

Seven months after the initial ban, with businesses in gridlock and traders stuck at the border, Sudan has yet to explain exactly what is wrong with Egyptian imports. In the meantime, local and international businesses, such as Saudi Arabia’s Savola Group have been caught in the middle. Savola has had to re-route much of its Egypt-based sugar production (normally sent to Sudan) to other markets. The irony is that Savola refines raw sugar from Brazil in Egypt and exports it to the wider region: in this case the banned agricultural products are not even Egyptian in origin. Egypt has retaliated by claiming Sudan’s moves amount to efforts to tarnish Egypt’s reputation.

Furthermore, Cairo and Khartoum have begun a tit-for-tat squabble as the issue of the Halayeb Triangle resurfaces. A disputed area along the Egypt-Sudan border, the Halayeb Triangle measures some 20,000 km² and is home to 27,000 people. Administered by Egypt, but claimed by both countries, the area is a recurring sore spot in bilateral relations. Sudan’s efforts may be politically motivated, but the Halayeb Triangle issue may also be serving as a convenient vehicle to prevent cheaper Egyptian products from flooding the market. The agricultural import ban only augmented existing bad blood between the two countries, as Sudan announced the formation of a committee to demarcate the border and settle the Halayeb issue on March 20th. In response, Major General Kamal Amer, head of Egypt’s parliamentary national defence and security committee, stated that “neither the Egyptian people nor the armed forces will let go of a single centimeter of […] Egyptian soil.”

Amer continued by noting that Sudan was under the enlightened protection of Muhammad Ali, ruler of Egypt and Sudan from 1805 to 1848, whose dynasty “graciously” granted Sudan independence in 1905. On the other hand Sudan maintains that Egyptian rule over Sudan in the 19th century was in name only, with Cairo only enjoying control over the region at the behest of the British Empire in the guise of Anglo-Egyptian Sudan from 1899 to 1956. The role of history has been key in the dispute, with the Egyptian media and government officials openly mocking Sudanese assertions that its civilization is older. Moreover, Sudan’s pyramids have been derided in Egyptian social media and on late night television. Egypt also recently expelled two Sudanese journalists, both of whom had written in favour of Sudan’s position on the Halayeb issue, with Al Tahir Satti complaining that Egypt does not treat Sudan as an independent country capable of making its own decisions. Satti’s column has also described Egyptian authorities in the Halayeb region as an “occupying force.”

In a response redolent of Queen Victoria’s dismissal of Bolivia’s existence, firebrand Egyptian television presenter Tawfiq Okasha argued that “there is no such place called Sudan […] Khartoum is nothing but one of the federal states of Egypt. Anyone who claims Halayeb and Shalateen belongs to Sudan has gone senile.” Furthermore, Magdi Shendi, editor of the Al Mashad weekly, claimed that “Sudan must stop playing politics with the issue. Halayeb only becomes an issue when the ruling party is trying to deflect [from] local problems inside Sudan.” Shendi’s statements may be on the mark, but they remain double-edged, as the same can be said of Cairo’s tendencies.

Both Sudan and Egypt are ruled by jumpy authoritarian leaders, both of whom are trying to deflect public attention from domestic concerns. Egypt’s Sisi is still in the process of consolidating his power, as questions of legitimacy remain, especially given the ousting and subsequent ban of the Muslim Brotherhood. Unsurprisingly, Egypt claims that Sudan is providing safe havens for Muslim Brotherhood members, a group which Egypt has branded a terrorist organization. In response, Sudan maintains that Egypt is funding anti-government elements, and providing residency to opposition figures while maintaining strict visa controls on ordinary Sudanese citizens. Furthermore, Sudan’s Omar al-Bashir is facing domestic instability as well as a lingering loss of prestige from the secession of South Sudan in 2011. Both Sisi and Bashir are looking for convenient targets at which to direct outrage.

As a result, following Egypt’s ousting of Sudanese journalists, Sudan has announced its implementation of a “principle of reciprocity” for Egyptian citizens, with calls from Sudanese media groups for the expulsion of all Egyptian media personnel. Efforts at a meeting to discuss tensions on April 9th fell through, with Egyptian officials blaming bad weather -a dubious excuse. More recently, Sudan has implemented a ban on all Egyptian males aged 18-50, citing terrorism concerns. During this same period Egypt angered Sudan by voting against lifting sanctions on Sudan imposed under UN resolution 1591.

Sanctions were unlikely to be lifted with or without Egypt’s vote, so Cairo decision to vote against the motion carried no risk to relations with partners such as the U.S while giving the government an international venue on which to humiliate Sudan. Moreover, the continuing arms embargo on Sudan works in Egypt’s favour should the two countries initiate border skirmishes.

April also saw Sudan call for direct negotiations and international arbitration on the Halayeb issue, with Egypt predictably firing back, immediately refusing any talks on the matter. The rationale behind Egypt’s refusal does remain bizarre. Muna Omar, assistant to the former foreign minister for African Affairs, stated that “resorting to international arbitration will by no means benefit Sudan, as the Egyptian state has the documents that confirm that the land is Egyptian, and Sudan will not be able to move forward alone. I demand that this dossier be completely closed.”

Alongside the Halayeb issue, Egypt-Sudan relations are being battered by the opposing stances held by Cairo and Khartoum regarding the Renaissance Dam in Ethiopia. The $4.2 billion, 6,000 MW mega-project is a key development priority for Ethiopia, and is supported by Sudan, which is also seeking to benefit from electricity generation. To this end, Sudan and Ethiopia have agreed to launch a free trade zone and railroad to aid equitable water usage. Egypt in turn fears the project with jeopardize the water levels of the Nile, threatening Egyptian hydroelectric production and water consumption. 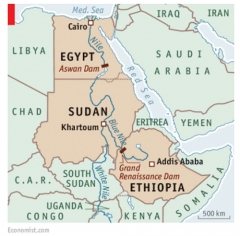 Similar concerns from downstream nations are common in such projects; what differentiates this dispute is the level of rhetoric employed. In 2013 Egyptian officials inadvertently broadcast their talk of potentially sabotaging the dam on national television. More recently, Ethiopia has claimed that Egypt’s efforts to secure a military base in rival Eritrea aims to “sabotage the construction of Ethiopia’s mega-dam project by supporting Eritrean sponsored anti-government forces,” according to Redda Malgeta, People Republican Democratic Front MP. This comes as pro-regime Egyptian activists demonstrated against Sudan’s Bashir after his visit to Ethiopia.

Sudan and Ethiopia have also warned of a potential Egyptian strike against the dam following the purchase of 24 Rafale jets from France. With said purchase, Egypt’s air force would have the range to target the dam (ironically from airbases near Egypt’s own Aswan dam) 1,500 kilometres to the south. With the dam’s proximity to the Ethiopia-Sudan border and Sudan’s outmatched air force, a potential Egyptian strike would face minimal resistance. This is no mere conjecture as Ethiopia has deployed long-range anti-aircraft missiles near the Renaissance dam construction site in order to hedge against just such a scenario.

A hominid species of genetically modified apes living together on a blue ball sailing around the Sun.....

Thats nice if you like Coca Cola adverts from the early 1970's.

But then they learn to speak, and create religion, politics, money and guns !

Two nonentities on the world stage, engaging in a "handbags-at-dawn" squabble to distract attention from the deplorable state of their respective internal governance.

Yep, the Politico trying to make themselves relevant through the fear they spread in the press.
Still, as long as we have people prepared to fight and die for causes they dont understand, some things will never change.