Just returned from a visit to Aswan where I had a brilliant time. Not my first visit to Aswan but my first time staying on the west bank there.
We set off early, very early in the morning and took the east bank road, en route we made a detour along the Marsa Alam road and visited a small temple that had been built by Seti 1, I think it was called Kness or Knuss, Glyph will probably put me right on the name, hopefully. We had to leave the road and go across the desert to the temple that is built into the side of the cliff face. When we got there found the guardians in a state of excitment, they had just discovered an asp, snake then beheaded but writhing about for ages afterwards. After telling them how impressed we were with their bravery the guardians agreed to open the temple to let us look inside. Only small but some of the carvings were magnificent and quite a lot of colour left. There is also remains of a well that had been dug and a Roman fort. Apparently the temple had been built by Seti to give thanks for his men finding gold nearby thus providing him with the where withal to built Abydos. Then tea with the guards a nice chat about where we came from, where we were going, where they lived, did they stay in the small house that they had there overnight, where did their water come from. We were invited to go into the house. Spotlessly clean metal mugs hanging from the roof by a string. Little wooden shelves high up on the walls with their belongings. Dicka's on which to sleep all in all a very happy visit. We all said we would hopefully see them again.
Backsheesh handed descretely over and off we went on our way. More later.

Not too much later, hopefully, Carrie! Lovely to read and I can't wait to read more!

Part 11
Our journey continued and after a stop at the bank, pharmacist and supermarket we made our way over the old dam to our hotel. My room was lovely with a small balcony looking out over the river and sand dunes sweeping down to the river. I had the same feeling I had as a child when I saw a piece of pristine snow and wanted to run over it and leave my footprints everywhere. After lunch which was, to die for, it was explore time.I was determined to climb to the top of the hill and slide down the dune. Well what hard work, every step was an effort. The calves of my legs were burning, I ended up on hands and knees crawling up the the sand as far as I could then gave up the effort before reaching the top. Walking in deep sand is almost impossible but I had fullfilled an ambition to climb a sand dune. Coming down was much easier, slipping and sliding down is much easier coming down rather than going up. Below me were about twenty camels I envied them their easy progress through the sand.
We then went and sat by the waters edge and I found some nice black pebbles and amused my self throwing them in the river. Tired by now and needing a shower and a rest before dinner we started to wind our way back to the hotel. On the way there here come the camels again, one stoppped to have a poo at the side of me and only then did I realise where these nice black pebbles I had been playing with had come from. Oh dear, never mind.
Shower, little sleep dinner and we were ready for off again. We wandered through the village and my friend found a coffee shop that was showing football on the TV. Oh he was delighted. Our hotel had no TV but did have Wifi. Well we left him there and found somewhere that we could have a drink without the football, the man who owned it had four huge crocodiles, well they looked huge to me, he wanted to know if we wanted to touch one. No thank you. Nice coffee there for which he refused to take any payment and it was time to pick up our friend on the way back to the hotel and time for bed.
Top

Sounds like a lovely time. Did you take photos? Would love to seem 'em if you did!

Aswan is a place I've never made it to "yet" and one day I do intend to walk those streets and explore the dunes.
Top

I left my heart in Aswan nearly twenty years ago- and it's still there! Can't wait to read more, Carrie.

@ Ruby Slippers - I've never made it yet to Aswan but want to go. What was it about Aswan that attracted you so strongly?
Top

If you ever get there, LLL, you will know! Most people disagree with me and prefer Luxor, Cairo or the Red Sea etc. but for me it is and always will be 'Aswan forever'!

I've only spent two brief visits to Aswan but on both occasions it has impressed me as a much more bright and colourful town. It seemed cleaner and just generally more looked after than Luxor. I've felt the whole atmosphere lighter and I also believe that stretch of Nile to be far more beautiful and interesting. I keep promising myself a proper visit there, spending at least a few nights and taking time to walk around, away from the Nile as I would in Luxor. I must get round to doing it some day.

The temple is (at) Kanais - it is quite a long drive east from Edfu. There is good rock-art nearby.
Top

That's it Brian that is the name. On the rocks near the temple but higher up is the first image of an elephant I have ever seen in Egypt. I had no idea that ancient Egyptians used Elephants which apparently they imported on special boats from further south in Africa. Will write more about the visit to Aswan later and try to upload some photo's.
Top

Like RS, I am also very happy when in Aswan. It always seems more industrious and less touristy than Luxor. And a relaxing trip by motor boat or felucca around the cateract is most enjoyable. A great new museum there too.

Carrie, almost opposite the new Nubian museum is a hotel called the Basma. Usually, this is where you can see the modern sculptures. Well worth seeing and the view from the hotel terrace over the 1st cataract is also worth stopping for a drink to see. Enjoying your visit along with you!

carrie wrote:That's it Brian that is the name. On the rocks near the temple but higher up is the first image of an elephant I have ever seen in Egypt. I had no idea that ancient Egyptians used Elephants which apparently they imported on special boats from further south in Africa.

A challenge for you. Find the elephant at Dendera. I have never seen this hieroglyph elsewhere. As a clue, here is a picture: 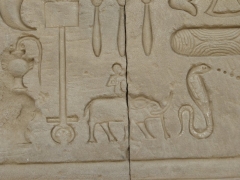 Pity that you missed the opportunity to see the open air sculptures, well worth a visit with plenty of water as its hot atop those rocks. With the museum on your left as you start to drive up hill I think it was the second turning on the same side that leads you straight to the top. I found a sculpture from my home town of St. Helens. They have a giant hippopotamus there with its mouth wide open, nearly ruptured myself climbing into it for a photo.

Sounds as though they've moved them. Thanks for clarifying, Dusak!

End of story.
Next morning we were due to leave Aswan and head off back to Luxor, on the way we decided to visit a small Isis Temple in the middle of Aswan, we walked round the outside and just as we approached the entrance the strap on my shoe broke so I was limping along one shoe on and one shoe off. We went to the entrance to be told that visitors were not allowed into the site. I pointed to my shoe and the guards let us in sat me down and argued about the best way to fix the shoe, meanwhile my friend was taking a few sneaky photos without the bars around the site spoiling her shots. Just then a young man turned up, another American, he was working on the site but was not an Egyptologist but an expert in medieval ceramics, apparently they had found a lot on the site and he was there to try to identify them. Nice chat with him, shoe repaired with a piece of wire, clever lot these guards, invited to have tea which we declined, many many thanks and off we went.
We returned by the east bank, the desert road and about three quarters of an hour out of Aswan the strangest sight, hundreds of dead camels and donkeys all over the desert. They looked as though they had just been taken there and dumped. All dried up but not seemingly eaten by any wild animal, they all looked intact.
Journey continued after that without any futher incident until we decided to stop for a drink at a small coffee shop in the middle of no where. They had the most gorgeous tasting honey for sale there, the man said it was local honey, not from a factory so stocked up on that.
On wards to home and our adventure was over.
Been back a few days now and still missing Aswan, beautiful beautiful Aswan, the east bank so much more cosmopolitan than Luxor the West bank spectacular, the river well what can one say about the river in Aswan. I loved the place before and am even more in love now. I don't think it will be long before I am off on my travels again.
Top

I'm insanely jealous, Carrie, but at the same time so happy that you too found the beauty and peace of Aswan, like I did all those years ago. It is the one place in all the world that I feel is 'home' - if that makes sense. Reading about your trip has really made me feel homesick.

Can't wait Yildez, not too long before you come back here again. You will love it there.
Top
25 posts