The Nile river's unusual turbidity after flooding last week saw the river turn from blue to yellow. The Minister of Water Resources and Irrigation, Mohamed Abdel-Moteleb, confirmed that laboratory research has confirmed that the water quality has not been affected and there is no threat to public health. 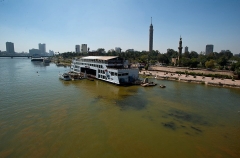 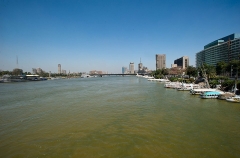 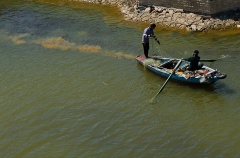 Photo Source:
Views of the turbid waters of the Nile, which is caused by silt from the flooding of the river.
http://english.ahram.org.eg/NewsContent ... media.aspx

Only worry if it turns red

The Locusts happened a long time ago, metaphorically speaking..

How many plagues have you got left to go I wonder ?

Now, when the plague hit the UK, those clever people in the countryside in Derbyshire thought that the water may be the cause of the problem, so they drank only from the Well's.
Wether that was true or not, we will never know, but those people survived.

As a thanks to those wells, they dress them every year in flowers. They still do that today. A little gratitude can go a long way.

Here's one from Sutton..

Here is the source url
http://www.suttonwells.net/
There's a time for everyone, if they only learn
That the twisting kaleidoscope moves us all in turn.
Top

I would think that if two million plus up Nile field workers are using the waters for a pee, then there should be no surprise as to the tainted tint.
Life is your's to do with as you wish- do not let other's try to control it for you. Count Dusak- 1345.
Top

Which it used to do every year before the building of the dams.
Top
5 posts • Page 1 of 1