An attack on a tourist bus in the Red Sea resort town of Taba has killed at least four.

It is the first attack on tourists during a terrorist campaign that has rocked the country since the ouster of Islamist president Mohamed Morsi in July 2013.

Three Korean tourists and the Egyptian bus driver were killed, while 14 others were injured in the blast on Sunday afternoon, security sources told Al-Ahram's correspondent in South Sinai. 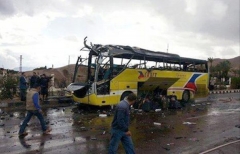 Earlier, security sources had told Al-Ahram Arabic news website that the bus was targeted by a missile.

Fouda stressed that investigations are still underway: "Until they are over, we cannot be sure of the cause of the explosion."

The explosion damaged the front of the bus, the interior ministry said.

Most casualties were taken to Taba and Nuweiba hospitals, Ahram Arabic reporter Hani El-Asmar said. While the urgent cases were taken to Sharm El-Sheikh International Hospital.

Thirty tourists of various nationalities were on the bus when it was attacked.

The authorities have closed off the international road leading to Taba to search for the perpetrators.

A pattern of bombings and assassination attempts has been growing since Morsi's ouster.

The main targets have been police and military installations in the Sinai Peninsula.

There have also been an increasing number of attacks in Cairo and the Nile Delta region in recent months.

Ansar Beit Al-Maqdis, an Al-Qaeda-inspired Islamist militant group based in Sinai, has taken responsibility for many recent attacks in Egypt.

The last major attack on tourists in Egypt took place in 2006 when a bomb killed 23 people in Dahab in South Sinai.

The Egyptian tourism industry, once worth more than a tenth of the country's economic output, has been struggling to recover since the 2011 revolution.

It has suffered further blows since last summer's political upheaval, which saw Islamist president Mohamed Morsi ousted after mass protests against his rule.

Egypt welcomed around 8.7 million tourists in the first eleven months of 2013, compared with 10.5 million in the same period of 2012.

This is truly awful news.
Sharm and it's surrounding areas have always been portrayed as Egypt's jewel in the crown where tourists are "safe"and security is tight.
Is this the beginning of a new wave of terrorism targeting visitors to the country?
The very people who they are trying so hard to attract?
It goes without saying that this will instill new fears in potential visitors and the international communities will update their travel warnings accordingly.
Another nail in the tourism coffin,methinks.
What's reaction to this latest news in Luxor?
Surely,but surely,there can be no ignoring of the situation and proclamations that Luxor is hundreds of miles away from the area in question..and is therefore safe.
I,for one,will be following my FCO advice very carefully re my trip to Hurghada in April.
Top

This really is extremely bad news and tragic for the families involved.
Top
3 posts • Page 1 of 1