2014 will be the year we eradicate illiteracy...

2014 will be the year we eradicate illiteracy...

2014 will be the year we eradicate illiteracy: Education minister.

Education Minister Mahmoud Abul Nasr has said that 2014 will be the year illiteracy would be eradicated, targeting three million illiterates. 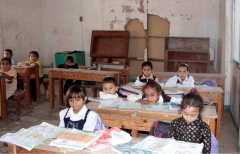 This statement came at a meeting with the minister of state for environmental affairs, the Swiss ambassador in Cairo and the UNESCO representative in Cairo.

According to a study by the Central Agency for Public Mobilization and Statistics (CAPMAS) revealed that in 2012, the total number of illiterate people aged 10 years or more in Egypt had exceeded 16 million, with over half, approximately 10.3 million, being females. Also, a large percentage of the elderly population was shown to be illiterate.

Meanwhile, illiteracy in Cairo was 17.4 percent, followed by Alexandria with 16.5 percent.

According to CAPMAS, illiteracy rates among youth aged 15 to 24 was only 8.5 percent whereas people aged 60 or more were much more likely to be illiterate, with a rate of 62.3 percent. This indicates that illiteracy may drop in the future.

Wishful thinking me thinks, they're still attempting to eradicate the National debt.

Now how many times have they stated that will soon be cleared up?
Life is your's to do with as you wish- do not let other's try to control it for you. Count Dusak- 1345.
Top

They're lofty goals and I definitely hope they achieve them. Illiteracy rates amongst the female population is a shameful reflection of negligence on the government.

Wonderful to recognize the problem and say you don't want it but you then have to detail what you're going to do to ameliorate the matter. What is going to be put into place to ensure that girls have equal access to education as males and to address the high illiteracy numbers?
Top
3 posts • Page 1 of 1