Past Preservers is proud to announce the Nazla Pottery Village, an initiative with the hopes of rebooting cultural tourism in Egypt through sustainable tourism and representation of ancient techniques.

The Nazla Pottery Village is not only keeping the customs of the ancient Egyptians alive but is also assisting in the exposure of their crafts to a modern audience. This initiative has potential to boost Egypt’s tourism in the wake of the 2011 Revolution, which resulted in a significant decline of visitors. Nazla Pottery aims to draw attention back to Egypt’s cultural roots and traditions by exposing Egyptians as well as tourists to one of the most important sites of notable intangible cultural heritage significance. 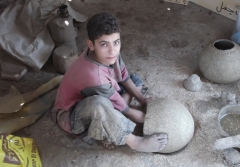 Nazla Pottery Village is a place of outstanding intangible cultural heritage as one of the rare Egyptian sites which produces terracotta pottery from Nile silt using Ancient Egyptian techniques. The village is one of three pottery production sites at Fayoum located in the Nazla Valley noted for its connection to ancient techniques, importance to sustainable tourism, display of modern handicrafts, and traditional transfer of skills over generations.

In 2006, Nazla was included on the Fayoum ecotourism map because of its environmental, natural and geological importance. Due to the historical and cultural significance of the area, Fayoum is home to the Tunis Pottery Festival, which takes place annually on 28, 29, and 30 November. Nazla Potters are planning to be part of the special festival in coordination with the Fayoum Tourism Authority.