The Egyptian presidency issued a statement Thursday afternoon condemning the bomb attack that targeted Interior Minister Mohamed Ibrahim's convoy, vowing not to let those who committed the crime escape justice. 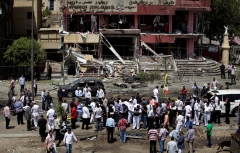 "The presidency will not allow terrorism, which was defeated by the people in the 1980s and the 1990s, to return once again," read the statement in the name of Egypt's interim president, Adly Mansour.

The minister survived the bomb attack on Thursday unscathed, although 21 people were injured, including a child.

No group has as yet claimed responsibility for the attack.

Re: Egyptian presidency vows not to let terrorism return

Definitely an A1 goal to not allow terrorism however I'd like to hear the plan as how not allowing terrorism can be achieved. IF terrorists get a foothold in Egypt it will definitely kill tourism once and for all.

Problem is - how does one identify a terrorist? What really needs to be put in place to stop them let alone deter them?

Seems these slimy cowards lurk just to strike with no provocation on the most vulnerable.
Top
2 posts • Page 1 of 1