Meet the Black Bloc: Egypt's most talked about radical group

Meet the Black Bloc: Egypt's most talked about radical group

After 45 days in detention, security forces have released eight young men arrested in April for being part of the amorphous and outlawed group the "Black Bloc." 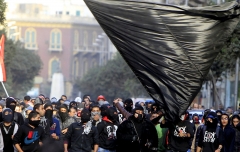 Eight youth slapped with the same charges, including spreading terrorism and banned ideas online, possessing firearms, using violence against public servants and burning down Muslim Brotherhood buildings, have been released.

Egypt's Black Bloc has ruffled the feathers of authorities since it mysteriously appeared on 24 January 2013. Just five days later, Prosecutor General Talaat Abdallah issued a blanket arrest warrant for anyone involved in what he dubbed the "organised group practicing terrorist acts." The media went wild.

One of the "Black Bloc" detainees is Youssef Ali, a student activist, known by his revolutionary contemporaries as "Joe the legend." During his detention, Ahram Online spoke with one of Ali's friends who, fearful of arrest, wanted to remain anonymous.

"Joe is accused of founding the Black Bloc but he is innocent," his friend insists. "He is not even a member, but is active online writing against the Muslim Brotherhood and Mohamed Morsi as well documenting the clashes."

After his recent release Ali denied all charges and accused the Ministry of Interior of mistreating him and others during their detention pending investigations.

The first time Egyptians heard of the "Black Bloc" group was when a Twitter account and Facebook page appeared online announcing that the newly-formed Egyptian Black Bloc would stage a march just off Tahrir Square a day ahead of protests for the second anniversary of January 25 Revolution.

On the same day, the group released a video clip entitled “The first statement of the Black Bloc” that outlined their raison d'être: to bring down Muslim Brotherhood rule.

The video showed hooded and masked young men walking on Stanley Bridge in Alexandria late at night carrying an Egyptian flag and several black banners emblazoned with the international anarchy sign: the letter A in a circle.

The following day, amid the second anniversary protests, the Black Bloc made headlines when they reportedly torched the headquarters of Brotherhood website Ikhwan Online, as well other properties owned by the Islamist group in downtown Cairo.

The prosecutor-general's office subsequently asked citizens to arrest any person suspected of being a member in the ambiguous group, including those who dress like Black Bloc members, calling on people to hand them over to security forces.

Homeland Security and Egypt's General Intelligence, the prosecutor-general said in official statements, had reportedly reached the leaders of the group. "It was only matter of time" before they would expose the huge conspiracy behind the organisation.

The resulting mania saw citizens hand over activists to the security forces. Young Egyptians wearing black or balaclavas became targets of the state.

"We are not afraid of arrest or the police. It does not matter anymore as the security forces killed [activists] Jika and Christy, my friends, so I am not scared anymore," says Morro, administrator of "Black Bloc Egypt" Facebook page.

Gaber Salah, or “Jika,” was gunned down during clashes between protesters and police off Tahrir Square in November 2012. Mohamed Salah, aka "Christy," was killed in February's street battles near the Heliopolis presidential palace.

“I want to send a message to the Ministry of Interior and Cairo Security Directorate that I will avenge my friends’ death,” Morro tells Ahram Online, adding that three members of the online group he administers were recently arrested.

"They are men, they will not expose the rest of us," Morro asserts.

"The idea of forming Black Bloc in Egypt did not start suddenly, we are a group of friends who have known each other for two years from all the clashes," explains Morro.

"We were already behind several riots like the clashes at the American Embassy [last year] and the riots in the Nile Corniche. We thought of forming a non-peaceful movement and began with a hooligan movement until we reach the idea of the Black Bloc."

Morro describes searching online for videos of protests and riots across the world until he and his friends found "by coincidence" footage of Black Bloc members in Greece.

Black Bloc originated in Germany in 1980s, when leftist protesters began wearing black clothes and balaclavas to resist arrest during demonstrations. The movement started as a peaceful one but soon developed into a more violent anarchist organisation, adopting tactics like vandalism and rioting. Black Bloc in Egypt is the first local chapter to be recorded in the Arab world.

"We became interested and read books about them to know their ideas and techniques and consequently decided to form Black Bloc Egypt," Morro says.

The goals of the group, Morro explains, were "bringing down the regime, destroying the Muslim Brotherhood and their properties, standing up to oppression by the Ministry of Interior and to secure all revolutionary rallies."

However, there are over 40 Facebook pages claiming to represent the Black Bloc in Egypt, including ones for specific governorates and areas, like Black Bloc Upper Egypt, Black Bloc Sharqia and Black Bloc Port Said.

Offline the local chapters have been fairly active: President Mohamed Morsi's hometown of Zagazig in Sharqia saw several violent clashes between alleged Black Bloc members and security forces during the past few months.

There is also a Black Bloc Facebook page for women, entitled “Black Bloc Girls,” which mainly criticises the president and the Brotherhood but has yet to claim responsibility for action on the street.

Many of these pages were pro-revolutionary sites that already existed before the Black Bloc emerged earlier this year, and simply changed their activities and names to fully support the banned group.

"Not being the sole Black Bloc Facebook page is actually something of a comfort. We find the people support us through these pages." Morro adds: "We are not the exclusive owners of the idea."

Many of the fans of his page want to join, Morro continues, but they do not answer all requests, for "fear of being infiltrated and consequently exposed." He claims the "Black Bloc Egypt" page is the only one monitored by the intelligence and security forces.

Morro continues to assert that his page is the official Black Bloc Facebook page in Egypt: "After all, we are the ones who are on the street." The claim is impossible to verify.

"There is no single piece of information released from an official investigative body about these boys, who they are for real, what they want or who funds them, so people can properly discuss the Black Bloc phenomenon," says Fouad Allam, a retired police general and former undersecretary of the Mubarak-era State Security.

The veteran police general, who has years of experience dealing with state-dubbed terrorist groups since the 1970s, demanded the prosecutor-general's office release the results of their investigations so that people can know the truth.

The secrecy surrounding the young men instead fuels massive speculation: the media continues to be fascinated with them.

Presenter Dina Abdel Fatah on the privately-owned Dream TV broadcast an interview with masked youth who spoke anonymously about the goals of the anarchist group.

Meanwhile, Islamist TV channels like the ultra-orthodox Salafist Al-Hafez accused opposition figures, and even the Church, of standing behind the illicit organisation.

Samir Naeem, professor of sociology at Ain Shams University, meanwhile explains that youth turning to non-peaceful expressions like the Black Bloc is a consequence of the brutality of the state.

"Violence begets violence and the whole atmosphere we are living in is violent. However, this should not be attributed to the revolution, as it started peacefully and is still peaceful,” Naeem explains.

“The ruling authorities, from Mubarak to the Muslim Brotherhood, are responsible for this violence. They started using brutality, whether through guns or thugs, to kill the revolutionary youth, who are also kidnapped and tortured and only have rocks to defend themselves."

The brutality of security forces, Naeem believes, turned Egypt to a lawless state governed only by the "law of the jungle."

The frustrated and brutalised youth — some of whom, after decades of oppression, have violent tendencies already — took the situation into their own hands using whatever means possible. "What else can we expect from young people?” Naeem asks.

As the country gears up for nationwide protests on the first anniversary of President Morsi taking office, the Black Bloc announced last week via one of its Facebook pages that its members will not use violence and will protest peacefully.

They also claimed they would stop their operations against the Muslim Brotherhood.

Perhaps, with tens of youth still in jail and threats of further arrests, Egypt's most-talked about radical opposition group has been cowed into moderation.

The red bit in the middle does say 'THE'

You must have eyes like a Owl keefy.. I cant see that..

Do they realise that thier Religion IS the System...

There's a time for everyone, if they only learn
That the twisting kaleidoscope moves us all in turn.
Top
4 posts • Page 1 of 1