On Monday 6 May, Egyptians celebrated the annual spring holiday of Sham El-Nasim, having picnics and eating traditional fish dishes

Sham El-Nasim, a traditional Egyptian festival celebrating the arrival of spring, is celebrated every year on the Monday after Coptic Easter. This year, it fell on Monday, 6 May. 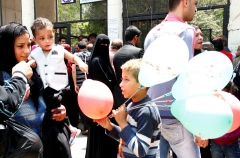 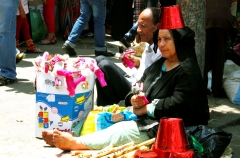 Celebrated since 2700 BC by all Egyptians regardless of their religion, beliefs, and social status, the name Sham El-Nasim (Inhaling the breeze) is derived from the Coptic language that, in turn, is derived from the ancient Egyptian language. Originally pronounced Tshom Ni Sime, with tshom meaning “gardens” and ni sime meaning “meadows.”

Like most ancient Egyptian feasts, Sham El-Nasim was also affiliated with astronomy and nature. It marks the beginning of the spring festival, which is the time they believed day and night are equal, (when the sun is in the Aries zodiac) hence marking the beginning of creation. They confirm the exact date annually by sighting the sun in relation to the great pyramid. Ancient Egyptians named it The Feast of Shmo (the revival of life) and have officially celebrated it since 2700BC.

At the crack of dawn Egyptians usually leave their homes to have a picnic with their families in meadows and gardens to enjoy the breeze. On this national holiday the traditional Sham El-Nasim meal consists of fish, onions and eggs.

Fish was highly respected in ancient Egyptian beliefs. Salted mullet fish (known as fesikh), was offered to the gods in Esna in Upper Egypt to the extent that Esna’s ancient name was Lathpolis, which was the name of the original fish before it is salted.

As for colouring eggs, it’s a custom mentioned in the pharaoh’s famous Book of the Dead and in Akhenaton’s chants, “God is one, he created life from the inanimate and he created chicks from eggs.” Hence, the egg was a symbol of life to ancient Egyptians

Ancient Egyptians would boil eggs on Sham El-Nasim eve, decorate and colour them in various patterns, then write their wishes on these eggs, tuck them in baskets made of palm fronds and hang them on trees or the roof of their houses in hopes that the gods would answer their wishes by dawn.

The habit of eating onions on that day is equally ancient. According to Egyptian legends, one of the pharaoh’s daughters had an incurable disease. Doctors were clueless until a high priest started giving her a few drops of onion juice. Her condition improved and her father, thrilled, named that day “the onion coalition day.” That day people would roam the city of Menf and offer onions to their dead.

As for flowers and plants, ancient Egyptians considered them holy and the lotus flower was actually the symbol of the country in ancient times.

In ancient Egypt, families would combine all of these: they would gather on the eve of Sham El-Nasim to colour the boiled eggs, prepare the fesikh and onion, some hanging the onions on their door steps to ward off evil spirits and putting them under their grandchildren’s pillows that night to summon the god Sukar. Before dawn, people would head to meadows, gardens and the Nile river bank to watch the sunrise while carrying food and flowers. They spend their day out in the open air, joyfully singing away the hours.

Little has changed since the time of the Pharaohs, apparently.

(All photos by Mai Shaheen)

I was invited to join my Egyptian friends yesterday and last night but unfortunately my intestinal tract had other ideas. I was surprised when told that on the main square facing MacD's, men were insisting on a charge if you wanted to sit on one of the council provided seats of stone that litter the area if you wanted a rest, but the seat was free if you bought a drink off them from their stall. These festive opportunists insisted that they had paid a rent to the council for this concession. Yer, right. My fried was unceremoniously escorted off the walk by two Egyptians when she refused to pay the 1Le to rest her bum. That led to all the family wading in, about twenty of them. Glad I had the best seat in the house here. They did say that this year was one of the best they could remember, but they saw only a handful of foreigner faces on their ten hour marathon.
Life is your's to do with as you wish- do not let other's try to control it for you. Count Dusak- 1345.
Top
2 posts • Page 1 of 1