Protests against President Mohamed Morsy and the Muslim Brotherhood kicked off across the governorates after Friday prayers today. Demonstrations have continued across the nation for the past week, since last Friday's massive protests marking the anniversary of the 25 January revolution. 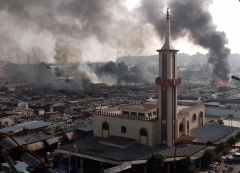 Hundreds in Suez protested in Al-Arbaeen Square, calling on Morsy to end the state of emergency imposed on the Canal Zone and to step down from office.

They also called for a new Constitution drafted by an assembly that isn't dominated by Islamists, the removal of the interior minister and the prosecution of those responsible for killing protesters.

The demonstrators prayed for those who were killed in violent clashes during protests marking the anniversary of the revolution last Friday, and chanted, "Come down, say it strong: down with the Brothers' rule," "Oh martyr, we swear by your blood, another revolution anew," and "Retribution, retribution from those who shot us."

The protesters than marched through Geish Street behind the families of the martyrs, who carried symbolic coffins. They held photographs of their children who died in clashes with the police at the Suez Security Directorate, and demanded that they be added to the names of the 25 January revolution martyrs.

In Minya Governoate, hundreds protested in Maghagha City earlier Friday afternoon, meeting in front of the Abu al-Ela Mosque before marching through the city streets to demand the fall of the regime.

The demonstrators chanted, "Hey, Abdullah [President Mohamed Morsy's son], tell your brother that the people of Egypt hate your father," and "Down with Morsy and the Muslim Brotherhood."

In Alexandria, thousands demonstrated near Al-Qaed Ibrahim Mosque, calling for Morsy's removal, the dismissal of the prosecutor general and for early presidential elections.

Protesters began gathering in front of the mosque after Friday prayers, as thousands of activists began marches from different areas east of Alexandria.

They chanted, "The people want to overthrow the regime," "Bread, freedom and social justice," and "Down, down with the supreme guide [Muslim Brotherhood leader Mohamed Badie]."

Thousands rallied in front of Mariam Mosque in Port Said to decry the violent clashes between protesters and police that have claimed the lives of dozens over the past week.

Protesters chanted slogans against Morsy and the Muslim Botherhood.

Despite the heavy rain and inclement weather hitting the canal governorates, demonstrators then took to the streets, declaring Port Said an independent state.

Violence in the governorate erupted last Saturday when the Port Said Criminal Court referred 21 defendants in the Port Said Stadium massacre trial to the mufti to potentially be sentenced to death. Protesters attempted to break into police stations and the Port Said Public Prison to free the defendants, leading to the killing of dozens of protesters.

Morsy declared a 30-day state of emergency and curfew in Port Said as well as in Suez and Ismailia pursuant to the violence. Responding to nationwide protests against the decree, Morsy then said it was up to each governor to decide how long to impose the curfew.