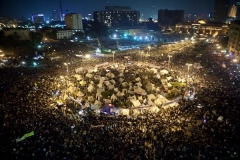 Dozens of parties and civil society groups had called for the protests after Morsy’s declaration last Thursday significantly expanded his powers and declared the Constituent Assembly and Shura Council immune from judicial review.

A march organized by the Tagammu Party arrived in Tahrir from Talaat Harb Street. Party members as well as members of the Socialist Youth Union and other revolutionary forces raised party flags and photos of martyrs. The march was led by Sayed Abdel Aal, the Tagammu Party secretary general, and party leaders Salah Saad and Nabil Atrees.

“We came today for Egypt and its future, as [the declaration] is a violation against citizens. We tell the Muslim Brotherhood, Egypt will not be yours and you will not be able to control it,” Abdel Aal told Al-Masry Al-Youm.

A march from Cairo University consisting of hundreds of students arrived in the square on Tuesday evening.

Protesters from Helwan and Ain Shams universities had gathered at Cairo University, chanting against Morsy, the Brotherhood, the Constituent Assembly and the recently-issued constitutional declaration. They formed a human chain along the side of the road in an effort to keep traffic moving smootly.

“Students say: we do not want remnants,” “Gaber Jika is dead and the president is responsible,” and “Kill us, no matter what, your tyranny will not affect us,” they chanted. They also carried banners reading, “No to the Brothers’ thuggery” and “Down with the supreme guide’s rule.”

“The Muslim Brotherhood claim that they are the majority, but today we have learned that they are a minority,” protester Gamal Ahmed Ali said.

A military officer participating in the demonstrations, Brigadier General Helmy Farag, commented, “The president succeeded in one thing — he unified the divided civilian powers for the first time.”

“The people paid the price, and we are not accepting dictatorship again,” Enas Youssef, a professor at Cairo University’s faculty of mass communications, said. “The Brotherhood wants the same benefits as the formerly ruling National Democratic Party.”

Tareq Heikel, a researcher with the National Research Center, said he was against the protest, but went to the square to watch. “If they want the fall of the president, then I assure you that Egypt will never have a president, whether he is elected or not.”

“If the opposition doesn’t like the elected president’s policies or decisions so they call for his fall, then the other side will do the same,” he explained.

A march that began in the Shubra neighborhood north of Cairo, led by former presidential candidate Khaled Ali, arrived in the square late Tuesday afternoon. Earlier news reports had said that Constitution Party leader Mohamed ElBaradei would lead the march.

The classic chants of the revolution came in loud roars, with protesters shouting, “The people want to bring down the regime,” as well as newer slogans such as, “Bread, freedom, down with Constituent Assembly.”

As he watched the march pass, one passer-by said, “It’s over. Tahrir is already full; Morsy will fall tonight.”

Protesters stressed that their large numbers prove false the Brotherhood’s claim that they represent the majority, chanting, “They said we’re a minority, we showed them a million-man march.”

Dozens of engineers belonging to the independent engineers union also marched from the union’s headquarters to Tahrir, demanding the cancellation of Morsy’s decree and the withdrawal of engineering sector representatives from the Constituent Assembly.

The engineers chanted against the Muslim Brotherhood and its Supreme Guide Mohamed Badie, while raising banners supporting the judiciary and rejecting the declaration.

Another march against the declaration composed of hundreds of Tourism Support Coalition members headed to Tahrir from the Hilton Ramses Hotel, with protesters chanting, “Bread, freedom, bringing down the Constituent Assembly.”

Coalition coordinator Ehab Moussa said, “Morsy’s latest decisions harm the tourism sector and investments in Egypt. Investors will run away after their trust in the Egyptian judiciary is shaken.”

Hundreds of political forces including the April 6 Youth Movement, the Constitution Party and the Tagammu Party gathered Tuesday evening outside the Fatah Mosque to begin marching to Tahrir. Protesters raised flags for their political parties and banners rejecting the constitutional declaration.

Free Egyptians Party secretary general in Ain Shams Mohamed al-Koumy said the march calls on Morsy to cancel the declaration. “We will bring down the regime if he does not respond. We will stage a sit-in, then announce a general strike.”

"We brought Mubarak's regime down in 18 days and we will knock Morsy and his group over in less than that."

“The security forces threw tear gas near the Socialist Popular Alliance Party’s tent in front of the Mugamma, after which Fatehy fainted,” Fahmy told Al-Masry Al-Youm.

“Fatehy was transferred to the intensive care unit at Helal Hospital where his death was announced 15 minutes later,” Fahmy said. “They killed him with tear gas. I am on my way to the hospital and lawyers are on their way to submit a complaint about the incident.”

The marches from neighborhoods throughout Cairo join thousands of protesters already in the square, chanting, “The people demand the fall of the regime,” “Down with the [Brotherhood] Supreme Guide’s rule” and “Mohamed Morsy is Mubarak.”

University students and retired officers were also present in the square, and a Wafd Party march led by party head Al-Sayed al-Badawy had set off from its headquarters towards Tahrir.

“The constitutional declaration is an assault on statehood and the rule of law,” said Mohamed Shaaban, a lawyer. “The president is seeking seize all powers, but the people will not remain silent until he moves back.”

Dozens of students affiliated with political parties also marched from Ain Shams University to the Tahrir protests, raising banners reading, “No to the new constitutional declaration.” Some students said they would take the metro to join a march staged from Cairo University.

Meanwhile, dozens of Muslim Brotherhood students distributed statements at Ain Shams University reading, “The main goal of the recent constitutional declaration is Egyptians’ interests, in order to hold retrials of protesters’ killers and allocate pensions to the injured and martyrs, as part of their rights.”