Official: Mohamed Morsi is the new president of Egypt.

Official: Mohamed Morsi is the new president of Egypt.

Farouq Sultan, the head of Egypt's election commission, has just announced that Mohammed Morsi is the winner of the country’s presidential runoff with a total of 13,230,131 votes. His opponent, Ahmed Shafiq, received a total of 12,347,380 votes. 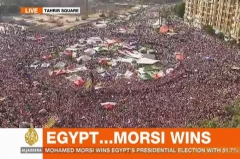 Re: Official: Mohamed Morsi is the new president of Egypt.

Best wishes for the egyptian population with their elected president. I don't envy him his seat...
"One band, two oil barrels, three chords, four dreams, five lies, six ties, seven deadly sins and eight ways to stay alive. They know who you are, they know where you live, they're the Kaizers Orchestra~"
Top
2 posts • Page 1 of 1