Ragab Sone supermarket will open today at 5pm - Opposite Vodafone on TV Street. 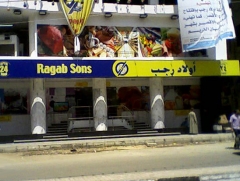 I was told that it will be 5 floors high (not sure if all the floors are finished yet), Maybe other floors are for stuff like white goods, clothes etc, I can't see them putting different food apartments on different floors.

What that old hotel place that never was is being finished, and hopefully open with some cheap Ramadan delicacies..

PS: They were only laying in new street electrics to it on Tuesday.
PSS: If it's the same Ragab & Sons from Cairo they have 5 stores with furniture clothes electrics ect, and quite competitive.
"The Salvation of Mankind lies in making everything the responsibility of All"
Sophocles.
Top

Assuming it is a branch of the Cairo chain, it looks as if an Egyptian company has some faith in Luxor's future!
Top

For those of us on the West Bank it will be the most convenient ie within walking distance of the river. I wonder if it would be worth asking if they would supply free taxi back to the river with shopping bags?
Top

Cheapskate!
I might agree with you, but then we'd both be wrong!
Stan
Top

Called in the new place today, basement and ground floor open so far, to be honest was a little disappointed the prices are higher than elsewhere and nothing new on sale there. They sell small electrical appliances and some rather nice crockery and glasses but apart from that dont think I will be going again, Kazer is more convenient for me.
Top

Not at all. KZ offer a lift for 4LE but its all the way round over the bridge . If they are truly in competition with KZ then they should be able to offer similar extras.
Top

Clarification needed, please: KZ will pay for transportation (taxi or delivery van or what?) to anywhere on WB?
Carpe diem!

Yes - or at least they did a few months ago. A friend of mine had heard of this service, and realising she had spent more than the qualifying amount (200EGP if I recall), she asked the cashiers. Had to wait ten minutes or so, and was taken to her home on the West Bank, and the driver even carried the shopping in.
I might agree with you, but then we'd both be wrong!
Stan
Top

transportation is by their van - room for 1 person but a second will need to be in the back
they deliver door to door and the 4Le is excellent for those heavy items over to the west bank i.e. bottles of water

not the most comfortable ride but an excellent service
Top

KZ Delivery to the West Bank is 10le, but can be restrictive, when the benzine is a problem they take deliveries off to the West Bank, and only do the East Bank for 4le. I use this service everyweek when possible. We have travelled back with my wife in the front myself on my throne that the driver puts in for me, (A nice chair) our friend sat on the spare wheel and another on a cool box, singing sixties music all the way home, a great experience, and lots of fun. I have learned the words to Id Rather go Blind by Etta James for our next weeks trip. ha ha!!! Bet Mohamed keeps the window up this time...
Top

KZman has my vote everytime!!! the guys in the store are wonderful, helfpul and obliging and the home delivery service is excellent!!! I've paid 5 LE when I was there in March/April, just before the benzine strike.....I am happy to pay 5 for that service, one of the reasons I am relocating is for this ease of shopping!! nothing like that here....believe me.....yes, of course shopping online in all the big stores is available, but for me, to touch, and feel what I buy, and to have the pleasure of such happy personalities is all part of the pleasure of shopping. Looking forward to saying 'selam' to Mohammed 1 and 2 and the rest of the guys there. Has the benzine strike lifted? enabling the home delivery service?there was 'talk' of a new Kzman store being built/opened on the West Bank, where the large garage is on the corner of the road to Medina Habu?
Top
14 posts • Page 1 of 1