A woman on holiday with her husband in Egypt "most likely" died as a result of gastroenteritis, an inquest heard.

Alison Sonnex, from Ramsgate, Kent, was at the Royal Tulip Hotel in Marsa Alam with Clive Eversfield in April. 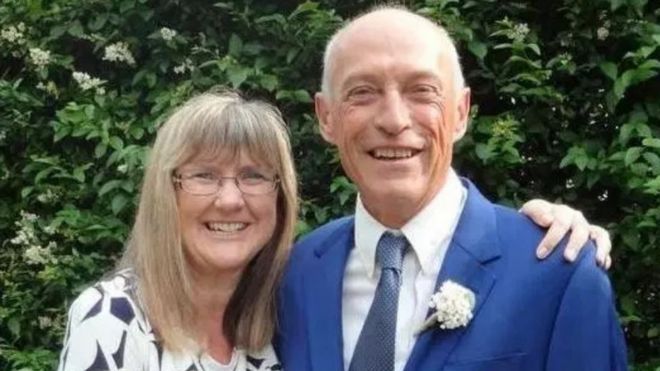 He told the inquest in Sandwich they had eaten in the hotel the night before they were due to fly home but at 01:00 BST both were ill with severe vomiting and diarrhoea.

Mr Eversfield said: "I was stunned I didn't go on holiday to lose Alison."

The court heard he believed they had suffered from food poisoning during their Thomas Cook holiday.

However the hotel said 700 other guests ate similar meals without any symptoms.

A post-mortem examination in Egypt showed a tear in Mrs Sonnex's heart but a pathologist from the William Harvey Hospital in Ashford said that had almost certainly been caused by CPR, or during the autopsy.

He concluded the 54-year-old's cause of death was "most likely to be gastroenteritis".

The court heard Mrs Sonnex collapsed in the hotel and was carried by staff to the hotel doctor.

He put on an oxygen mask and called an ambulance which took both of them to Port Ghalib hospital.

At the hospital Mrs Sonnex sent a text message to a neighbour and asking her to continue feeding the cats, the court heard.

But within a couple of hours her condition deteriorated and she was taken to the intensive care unit.

Mr Eversfield was receiving treatment for dehydration when he was told his wife had died.

The Royal Tolip/Tulip Hotel chain is 'well owned' almost certainly by persons in uniform. Generally the non-Egyptian comments on their hotels are poor but you need to balance these against the robotic positive comments from locals who may or may not have stayed there. Their Cairo hotels are connected to military facilities and military residential suburbs and attract a crowd that is not civilian. Generally they are 4 1/2 stars by Egyptian standards and 3 stars by the rest of the world.

Dying of gastro is not common, usually its a much more potent bug. When I last checked gastro was a general term covering many complaints used indiscriminately by illiterate persons, and definitely not by doctors or lawyers with a brain - a bit like saying a person had a respiratory infection - it could be nothing or it could kill you.

Oddly the inquest seems to have no access to blood, liver or kidney - maybe the Egyptians 'cut these out' as they have done in three not unrelated recent coastal deaths. These organs and cultures would give a specific cause not just this general one which could mean anything. That Thomas Cook is involved again is unsurprising as that firm wallows in insolvency and poor custom. The inquest appears either not to have the evidence of be doing a pretty sloppy job.

A good US court would have the hotel and Cook up on a $US5 million negligent death case, freeze western assets following which hygiene might improve. The possibility of a criminal case in a US court for wrongful death fascinates me but will probably not happen.
Top
2 posts • Page 1 of 1