Some prefer to spend their lives in the pig sty or the charnel house – either because it gives them pleasure or suits their ‘particular’ skills. Some like to do business with ‘like minded persons’ – wide definition of the word person.

Naguib Sawiris of the immensely wealthy and corrupt Sawiris family has been doing business in North Korea for more than 7 years although the alarm went up 2 years ago that he might be a criminal for breaking sanctions and he then announced the sale of his mobile phone system there. The New York Times who hates him and checked six months later and called him a liar. He was having trouble because he had a fight with the local cannibals who wouldn’t let him take his money out and for reasons unclear about 8 months ago the North Koreans attacked his Egyptian IT system and brought it down (you wonder about his IT skills if his own system can be brought down by these stone age creatures). If they are trying to destroy his IT system maybe he's not popular there.

He now thinks the whole situation is changed, that the next meeting with Trump will break the dyke of blood and he will be a big investor in telecoms and tourism in the future. As usual he behaves like a 12 year old male on methamphetamines and ignores that the first Trump meeting achieved nothing, that the Korean monster has been waving his ‘powerful’ vitals since and that the new Congress will have a view on the matter. As ever Naguib is off on a self interested flight of fancy. https://www.reuters.com/article/us-egyp ... SKCN1Q111Z. The idiot even confesses that he still owns the telecoms.

99% of the experts think that North Korea won't de-nuclear. or if it does it will lie and hide backup or even if things go will there will be no trade opening in under 4-5 years at which time Trump will be on the way out or will have been out for 3 years. Does any sensible person bet on Trump?

He has had a few problems lately – sold his Egyptian telecoms system to a criminal Russian Oligarch, got kicked out of Canada and told not to come back and the Brazilians have said the same thing about his telecoms aspirations there. He screams from the roof tops that gold is king, he invested a billion or so in that, but its been flat for 4 years and he is backing out of it. On a positive note he claims, the government does not confirm, that he is doing a $2 billion middle class housing development in Pakistan – a country that barely exists and looks to an economic future worse than Egypt. As usual he has announced this MAJOR PROJECT, about 5 times but I think not a brick has been laid.

Its interesting that he had few problems in North Korea even though tens, possibly, hundreds of thousands starved whilst he was doing business there. The current creatures uncle was his negotiation partner but he was placed on the end of a cannon and exploded in front of school children who were forced to look. Another version has him attacked/eaten/killed by hungry dogs ans some versions of this have a forced viewing crowd. All versions have his wife, children, their partners and their children killed. If this animal like behavior is meted out to the elite imagine what happens to poor and ordinary people and imagine the Egyptian business skills necessary to survive. Sawiris is interested because it’s the wild west with no rule of law and where extreme ruthlessness prospers.

The man is a hypocrite and the Coptic Church delusional or deranged because in October last year Sawiris was the keynote speaker to a summit sponsored by the Coptic Pope of hundreds of Coptic children and young people. A man with his morals, Copt that he is, is a person to be kept away from and impressionable young people, from all young people, and should not be presented to them, or anyone, as a role model. Coptic Church behavior on this matter is similar to scores of others which lead me to wonder whether they have any morals.

He is used to putrid waters because of his previous dealings with the corrupt Arafat and had a try in Syria with the Assad’s – outcome not clear – and seem to have picked up those contracts/rivers of US money in Iraq.

Talking of this the North Koreans are about 5 inches shorter than the South and 20-40 IQ points lower. Their IQ is so low because of awful diet that the US Chiefs of staff have speculated that a collapse of the north would result in about 20 million people with intellectual skills and matching them to a job other than very menial would be a problem and as a result these people would be a huge cost on the South and the US as well as a sad human tragedy.

Now he has seen a fantasy glimmer in North Korea he fesses up that he never sold his telecoms - even though he said he did. One can only hope that a European country or the US place him on criminal charges.

Sawiris takes advice from the best, probably at a very high price and here is Tony Blair they in Mykonos 20 months ago smooging and they have also been photographed together in the south of France, A meeting of minds. 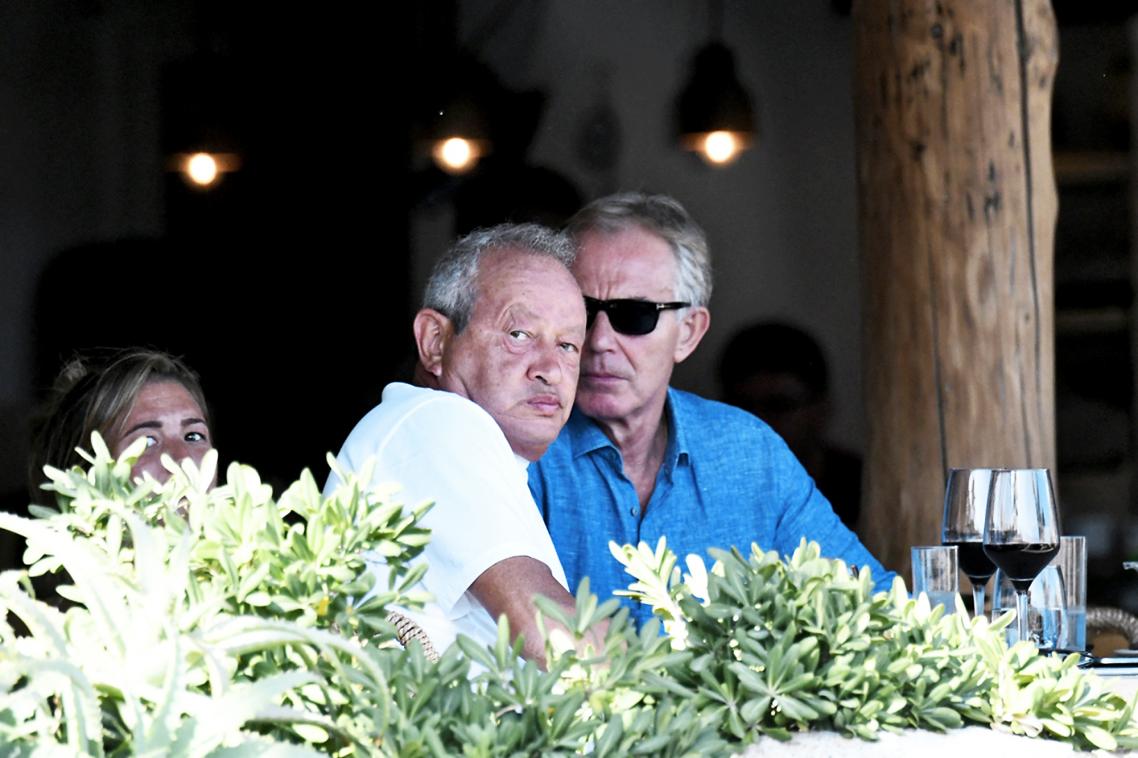 St Tropez going to the Sawiris yacht. Lets hope there were blood supplies on board. 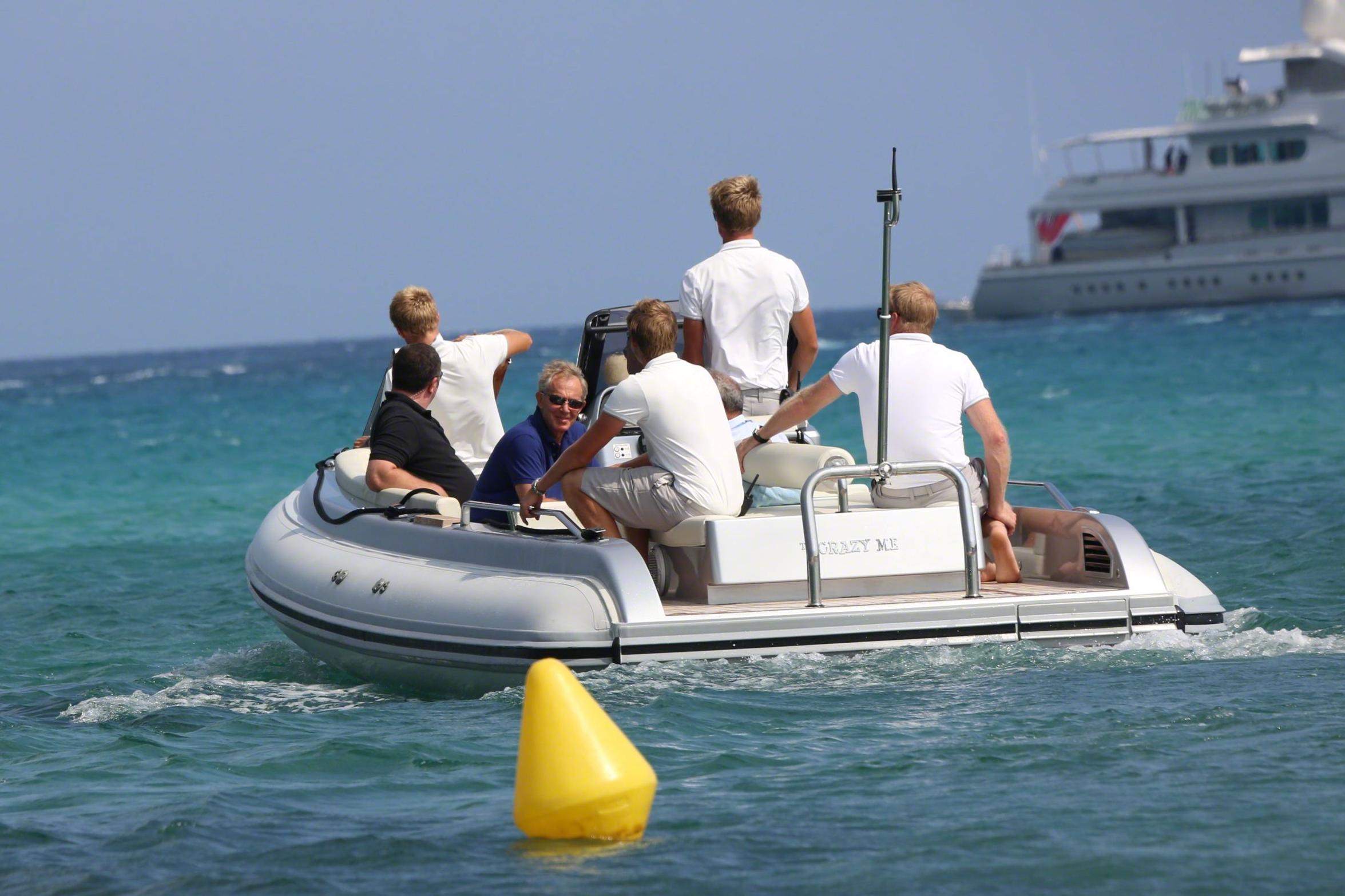 Mandelstam and Alistair Campbell have also been sniffing around – possibly for corpses – in Egypt over the past 2-4 years and are not unconnected to Sawiris. I guess likes attract or people don’t feel their integrity will be compromised by whoever they take blood money from. At one stage there was a published rumor that one or all three were advising Sisi. That was around the time of his HURGHADA SUMMUT and the 3 trillion in investments he announced there - little of which arrived.

Most will recall Sawiris 4-5 years ago saying that he would buy a Greek island for the fleeing Syrian refugees. It was a stunt to massage his image. Every man and his dog knows that Greek law prevents the sale of an island to a non national. How a private individual would have the skills or staff to immediately set up a refugee camp from scratch, let alone provide the water, food and power to an island is obvious. Why would any responsible person give the care of vulnerable people to a mere property developer/telecoms billionaire whose own charitable foundation is clear evidence of several decades of gifts to related and undeserving parties? His proposal was off – he never suggested a 20- year lease – almost certainly because he wanted the fee simple on the back of/under the cover of his morality opera following which he would turn it into tourism/houses as he has done in Cyprus. His stunt worked because most people are gullible and stupid. People like him survive because no one stands up and calls him for what he is.

A possible conclusion is that corporate morals in Egypt are among st the worst in the world but getting a fix on this when almost all stay only in Egypt is hard. This character has emerged into the sunlight and we have a clearer view.

Untypically for me the above contains few footnotes the reason for this is a liquid accident with a key board the solution to which is promised to be less than the gross sovereign debt of Australia. If any want me to firm up the above with footnotes please ask and I expect I will be back on board in a week - or not.