Lock Up All Old Ladies.

Lock Up All Old Ladies.

The BBC recently interviewed a woman about the torture of a relative.

She has now been arrested and detained for 15 days for, who knows, defaming the fatherland, undermining the infallible integrity of Egypt, attacking the invincible army or maybe they just used the standard offence – she is a terrorist in a fictional form.

How can you lock up a person for an alleged offence. In a civilized country the accused are detained for interview, a charge may then be laid and then you appear in a court in relation to bail when preliminary evidence is produced. But not in Egypt.

Clearly where there is violence, murder or threat (not alleged in this case) a more custodial approach is adopted.

Is Egypt barbaric? In relation to legal/police matters the jury is out - but there are no juries in Egypt because the notion of ordinary citizens participating in justice is absolutely, completely and finally rejected. Not really the approach of a non-barbaric country.

Here is her photograph – any fool can see she is a major threat to Heroic Egypt and to the security of 90 million: 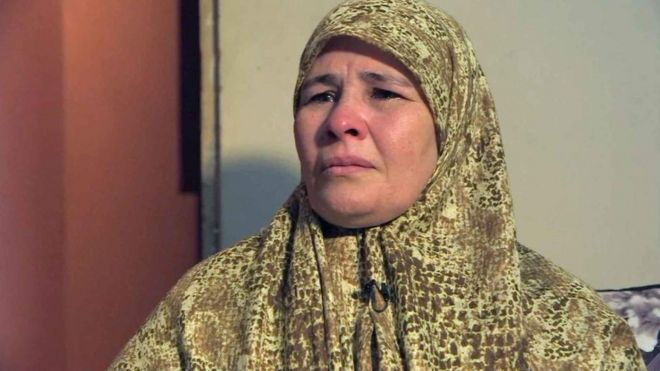 Who cares and who knows – reality and facts have been long abandoned and the army and police should just round up ‘people we don’t like’ because they know these things, are perfect and work only in the interests of all Egyptians and not just those making all the money out of ‘current arrangements’.

There should be thousands of prisons to lock up the tens of millions of trouble makers and degenerates – Egypt will never be safe until half the country are locked up. The bombing terrorists are a minor problem superbly dealt with by the invincible Army.

The million man police spends all its time tracking down old dangerous women who talk to degenerate western media creatures. No Egyptian should ever speak to a foreigner without severe penalty. The 100,000 Tourist Police should be issued revolvers to enforce this sensible policy of unremitting positive communication to all visitors that all is perfect in Egypt - particularly the political and military leadership. They are infallible.

In a moral world all travel companies would stop travel to certain countries – but that assumes their customers have moral standards and a casual visit to the coast tells you they don’t . They don’t even have basic manners or self control. Some lack hygiene. It also assumes the managers/owners of travel companies have morals - but as everyone knows they don't and are as bad as the sinkholes they send their customers to. But they give tax deductible money to homeless people - but only accompanied by the Prince of Wales and a photographer for Hello Magazine.

Getting people on this forum to respond to this idea is unlikely but many get angry about eating meat from a place that treats animals badly. I think we have odd morals.

(it’s a sad thing about journalism that your sources pay a price whilst you are safe in London – in a civilized country where the police don’t run wild).

When people say a place is 'spinning out of control' they usually mean chaos. Could Egypt spin out of a through a gross excess of control?

It already has done hasn't it? The place according to posts just goes from pathetic to grossly pathetic, with no one in control, just someone looking after their own interests. Another vote taken care of and someone now can vote on her behalf. It will not belong now before the West turns its back on the Country giving it up as a bad case of no hope.
Top

My name is Ozymandias, King of Kings;
Look on my Works, ye Mighty, and despair!
Nothing beside remains. Round the decay
Of that colossal Wreck, boundless and bare
The lone and level sands stretch far away.

Shelley's famous words in someways echo the current state of Egypt....with its modern day pharaoh surveying a decaying vista while we all despair.

Is it depressing to dwell on the current climate here? Yes.

Is it sensible to comment on it? No...not if you value the right to visit or live here.

Egypt is by no means as bad as some authoritarian states, but is, perhaps, unique in attracting millions of visitors who are unaware of, or choose to ignore. events which they would consider unacceptable in their homeland. And why should they, when their own government cheerfully trades with Egypt and barely raises an eyebrow when human rights are flagrantly abused.

As I've said before, Egypt's own society is divided between those that reject as"lies" any bad news and those who, whilst acknowledging what goes on, think it's a price that has to be paid for a long overdue reconstruction of the economy. If the Egyptians themselves are complicit in, or accepting of the situation, why should Johnny foreigner be concerned?

There's was a recent event in Britain which is rapidly becoming a cause célèbre in Egyptian social media and the press. An Egyptian girl student in Nottingham was set upon by a gang of girls (of African descent - but aren't we all?) and is currently seriously ill in hospital. The Egyptian media has gone into overdrive, demanding that the culprits be punished. The Embassy and Foreign ministry have added their two pennyworth.

Claims abound on Egyptian social media that the police were slow to react, or the hospital treatment inadequate......the inference being that Egyptian lives don't matter..

Not so unique Newcastle look how many tourists visited Spain during the Franco years, myself being one of them. Do tourists really care about the political situation in the country they are visiting or do they just hope to have a fun, safe holiday. Sod the natives.

carrie wrote:Not so unique Newcastle look how many tourists visited Spain during the Franco years, myself being one of them. Do tourists really care about the political situation in the country they are visiting or do they just hope to have a fun, safe holiday. Sod the natives.

You're right Carrie...although I was more focused on current examples. Greece was also a popular destination in the days of the Colonels.

Nowadays, I suppose Turkey springs to mind but I'm not sure they have the same visible level of repression that you see in Egypt. Yildez will know better. My last visit was pre-Erdogan.

Any hardship visited on the locals is, of course, rarely experienced by the esteemed tourist...in any country.
Top

I'm sure many are mad, stupid and amoral but putting your money in a dirty pocket amounts to some responsibility.

We get angry at the ill treatment of domestic animals, funny about abattoirs, refuse meat because an animal is killed, throw bad hings at people who wear mink, outraged that an actress is groped by a Producer but are sanguine that we sit on an idyllic beach with staff being paid nothing, a hotel owned by a crook who doesn't pay tax, dealing with entirely fake and badly managed staff, food flown in from 5000k's, and a coral reef dying faster than us. Our moral and personal 'sensitivity' on certain, selective and essentially not important issues is amazing. Human beings don't seem to matter in some worlds of morality.

Given the internet and the hysterical nature of facile public opinion I think its only a short time before certain places get on some public black list and the tour companies and airlines traveling there come under pressure. Lets hope they go broke. On the other-hand the 'people' who book the packages to the coast will notice nothing but sun, booze, low prices and a bit of sex.

50 years ago you could run a nasty place and tourist idiots would still give you money but I think that time is coming to an end - the only question is whether the end is sooner or later. I suspect but do not know that its inevitable.

Of course there could be a perverse benefit of 'current arrangements' Maybe marketing to the most Brexit areas in the UK could attract those that like a clear national direction, strong leadership, regular national anthems, no minority rights, removal of liberals, suppression of debate and lots of law and order. Planes of such tourists would need scores of vomit bags and a strong police presence after arrival.
Top

carrie wrote:Not so unique Newcastle look how many tourists visited Spain during the Franco years, myself being one of them. Do tourists really care about the political situation in the country they are visiting or do they just hope to have a fun, safe holiday. Sod the natives.

You're right Carrie...although I was more focused on current examples. Greece was also a popular destination in the days of the Colonels.

Nowadays, I suppose Turkey springs to mind but I'm not sure they have the same visible level of repression that you see in Egypt. Yildez will know better. My last visit was pre-Erdogan.

Any hardship visited on the locals is, of course, rarely experienced by the esteemed tourist...in any country.

I doubt very much whether any tourist visiting one of Turkeys numerous resorts would see ANY sign of repression at all. Politics, freedom of the press, TV etc, inflation, changes in education, corruption at all levels - these things do not impinge on the average tourists 2 weeks of sun, sea and shopping. The waiter who serves cocktails is hardly likely to share his worries over how he'll feed his family through the winter months.

The vast majority of Turks have no contact with foreign tourists, and tourist resorts bear no resemblance to real life in Turkey.
Top

Yildez wrote:
The vast majority of Turks have no contact with foreign tourists, and tourist resorts bear no resemblance to real life in Turkey.