Disturbing pictures of the body of a Egyptian teenager bearing the marks of extreme abuse have emerged, two days after he was arrested by police.

The remains of 19-year-old Tharwat Sameh were found on a street outside the town of al-Fayyum, south of Cairo, on Monday. He was only wearing underwear, and his entire body was covered in extensive bruising and contusions, burn marks and evidence of having been whipped. 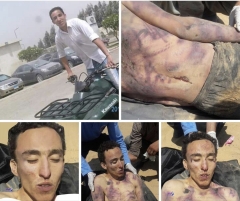 The young man - from Egypt’s Coptic Christian minority - was taken in by police for questioning on Saturday, local media reported his friends as saying. Pictures of his body were quickly shared on social media under the hashtag #Tharwat_Sameh, along with calls for answers over the teen’s death.

Mr Sameh is allegedly the second individual to die after being arrested by the Egyptian authorities in a week: on 18 July the family of 43-year-old Gamal Aweida, of Cairo, was notified he had died after 15 hours in police custody.

It is not immediately clear why either man was arrested.

Amnesty International has already called for an investigation into Mr Aweida’s death. “The evidence strongly suggests that Gamal Aweida was tortured to death by Egyptian police,“ a statement from the rights group said.

The younger man’s death has triggered memories in Italy of the death of Cambridge student Giulio Regeni, whose body was discovered also bearing signs of torture 18 months ago.

The Egyptian authorities initially ruled he had died in a road traffic accident. The exact circumstances of his death are still unknown.

Local charities estimate more than 730 Egyptians disappeared in 2015 - 2016 while in the custody of the police or armed forces.

The government of President Abdel Fatah al-Sisi - an ex-military chief who assumed power after overthrowing democratically elected Muslim Brotherhood President Mohamed Morsi in 2013 - has repeatedly denied it carries out torture or extrajudicial killings of dissidents.

It'll be interesting to see what "story" the authorities come up with for this one.

The fact that it's reached the international press does nothing for Egypt's reputation.
Top

Here his father seems to say it was a car theft and ransom case http://www.mobtada.com/news_details.php?ID=632350

Father of the young man
The sites and satellite channels of the Muslim Brotherhood have been promoting the rumor of the torture of an Egyptian youth and the dumping of his body in the desert of Fayoum.

But the father of the young Tharwat Sameh, came out in a video, to confirm the lies of this rumor, and cut the way to the promoters, and confirms that his son was kidnapped by a gang stole his car and then detained him and Sumoh money.

This came after the father of the young man in the record number 4600/2017 administrative Tamiya police station in Fayoum that his son was absent from the house on the evening of 21 after he went out to search for the car that was working on it and stolen from him during the month of May.

The father of the young man said that he received a phone call from a person at 2 am on July 22. He told him that the car was in his possession and that his son was with him. He asked him for a refund and allowed his son to speak to him.

The boy's father said he had not been informed of the incident since his son's absence until the body of his son was found, denying his son was arrested and tortured by the security forces, the Brotherhood claims.
Top

After what I went through and things I have seen for my own eyes, I would not trust the secret police at all and would go has far to say that the secret police probably made that story up Newcastle to cover up there own tracks, they did the same with the Italian boy Giulio Regeni, the police shot a few Egyptians dead and then said they had caught and killed the culprits. Yeah!!! All cover-ups and the world knows this.

I had a Go Camera on my Motorbike and have film of authorities pulling a man from a car and taking him into a room at a check point, I bet they wish they had shut the door while the camera was rolling. Let's face it there is no discipline in authority in Egypt, they are free spirits, with no legislation. Poorly disciplined, arrogant to the point of being tasteless, and in many cases uneducated in life, living caring and authority. Has anyone seen the equivalent of Moriarty Police Laws in Egypt or is it a case of make it up day by day, and cover up when you can. We all hear stories out of Egypt where authority has been arrested and charged with various offences, but no one hears of the final result. It always seems to get swept under the carpet, by lack of evidence, or payment maybe.
Top

If you carry on like this, your ''secrete'' investment here will not be so ''secrete'' soon.