Photos of Sisi on a bike goes viral.

Photos of Sisi on a bike goes viral.

The photo was widely circulated and commented on as Egyptian officials are rarely seen in such a casual setting. 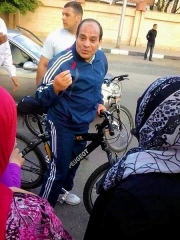 People were surprised by the field marshal with his personal guard, Mohamed Shaarawy. He did not notify any security authority. He was riding his bike. It seems that the field marshal wants people to abandon cars. He reminds us of European officials, who ride bikes in streets,” said TV Presenter Ahmed Moussa on the privately-owned Sada al-Balad TV channel.

Several comments were made on Facebook and Twitter on the photo. Some welcomed the photo, while others attacked it.

One of the commenters said, “That’s the leader. The coming president is the patriotic man who rides a bike on Egypt streets.” Another one said, “Adidas training suit and a Peugeot bike, so where is the austerity?”

Sisi made a statement earlier saying that Egypt is suffering from a weak economy and called on people to stick to austerity measures.

an infective agent that typically consists of a nucleic acid molecule in a protein coat, is too small to be seen by light microscopy, and is able to multiply only within the living cells of a host : [as adj. ] a virus infection.
• informal an infection or disease caused by such an agent.
• figurative a harmful or corrupting influence : the virus of cruelty that is latent in all human beings.,,,,Viral ?....

I have a picture of Christ on a bike, a Raleigh Chopper no less, performing one of his miracles..

In my old neighbourhood in Copenhagen there lived several politicians and you would see some of them on bicycles to and from the parliament as the most natural thing in the world, of course. I remember while waiting for the green light, seeing a pair of heals as high and blingy as mine one morning on the bicycle lane, which was a little unusual. They belonged to the European commissioner for climate action in the European Commission. I thought that this was a very Danish thing.

Once after dinner time, I passed the house of the then Defence Minister during an extraordinarily hectic time in his carreer. He stood behind his kitchen window at street level - washing dishes by hand, why not? I had a feeling that this would only happen in DK, but perhaps we'll see that in Egypt next..?!
Top

1. of the nature of, caused by, or relating to a virus or viruses.

2. (of an image, video, piece of information, etc.) circulated rapidly and widely from one Internet user to another.
"a viral ad campaign"

1. an image, video, piece of information, etc. that is circulated rapidly and widely on the Internet.
"the rise of virals in online marketing"

I still prefer : "figurative a harmful or corrupting influence : the virus of cruelty that is latent in all human beings.
Note: I love ex El General El Hefe Field Marshall el Sisi to bit's, he's got my vote any-day, I love Boris my mayor he rides a push-bike everyday past my London residence. Personally I'd rather vote for Adel Iman...

At least there will be less deaths on the road, bikes do not go as fast, wonder if they will introduce a Cycling Proficiency Test?

PS I think Boris Johnson rides a bike to work on a regular basis, along with David Cameron and Nick Clegg, but that may be just a PR thing.
Top

You must be joking CE I bought a bike and after three attempts gave it up, passing parked cars when the door suddenly opens and nearly knocks you off. If you fall off your bike here there is hardly anyway soft to land. Much safer in a car at least you have a little protection.
As for the commity, how are you going on with your plans to start a motor cycle club? Have you ever had any replies to your emails? I think the commity is dead.
Top
8 posts • Page 1 of 1